Our next port is Laem Chabeng which required another 90+ minute bus transfer to Bangkok.

There are tons of things to see and do in this vibrant metropolis – from visiting its numerous wats (temples) to touring the Grand Palace and exploring the city’s klongs (canals). Of course you always have the option to shop and party till you drop!

Having been to Bangkok before, we decided to take a cooking class and just pack in whatever sightseeing we can. 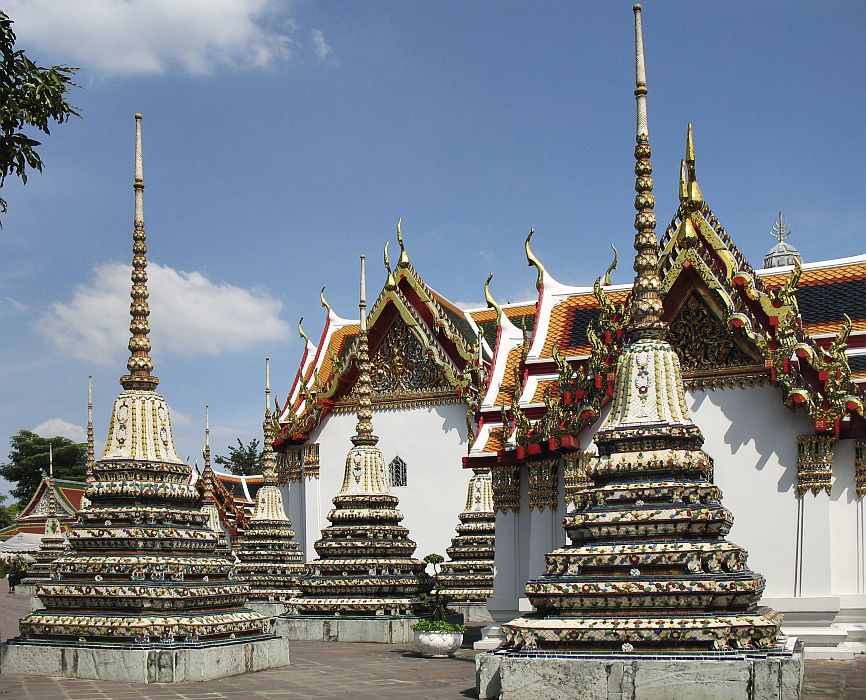 Some of the 91 ornate chedis (temple mounds) on Wat Pho’s grounds.

Wat Pho is one of the largest and oldest wats in Bangkok. It is also known as the birthplace of traditional Thai massage.

A massage from the school is under $8, but obviously without any pampering or ambience! 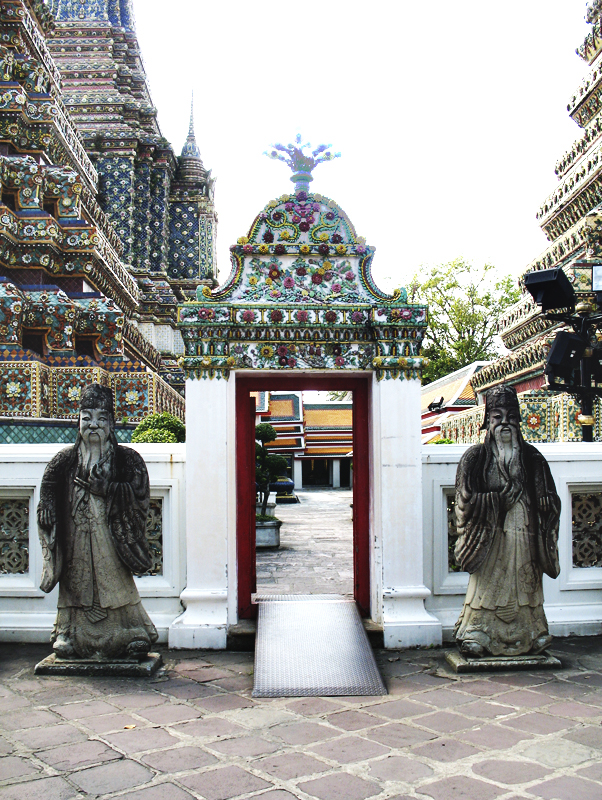 We saw pairs of figures resembling ancient Chinese court officials and generals standing sentry by the gates. For variety, there were some guards in Western attire (looking to me like the Mad Hatter) which were supposed to represent Marco Polo. 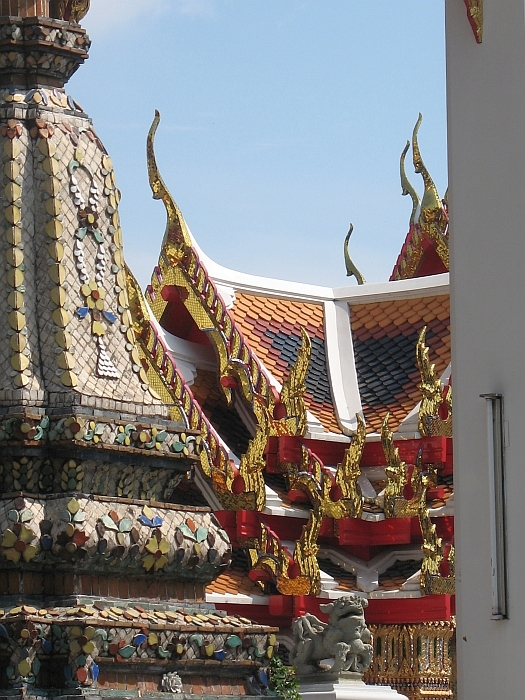 View of brilliantly colored temple roof gables and chedi in the courtyard.

The architecture in the temple grounds is a fusion of Indian, Chinese, Khymer and European influences, resulting in a visual texture that reflects the country’s rich cultural heritage. 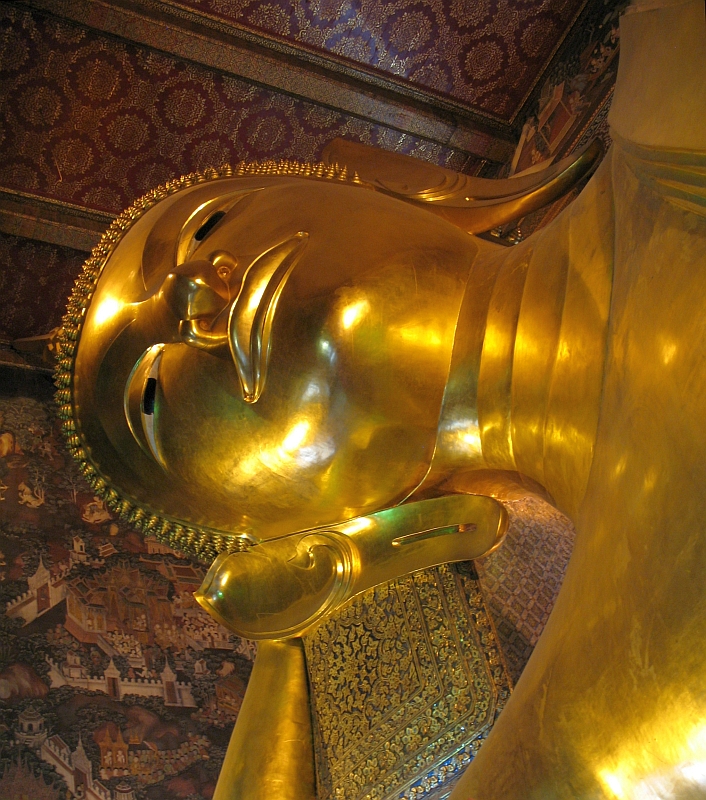 Wat Pho is famously known as the home of the Reclining Buddha.

At 141 ft long and 49 ft high, it is the world’s biggest reclining Buddha statue.

The statue is covered in gold leaf except for the bottoms of the proportionately monumental feet which are inlaid with mother-of-pearl illustrations of the 108 auspicious laksanas (characteristics) of the Buddha.

We booked an afternoon class at Silom Thai Cooking School. The half day session included a trip to the market and a 5-course menu which included a soup, 3 entrees, and my favorite Thai dessert – mango with sticky rice!

It was Thanksgiving Day and the class was a great culinary alternative to the obligatory turkey-n-stuffing dinner being proffered on the ship. 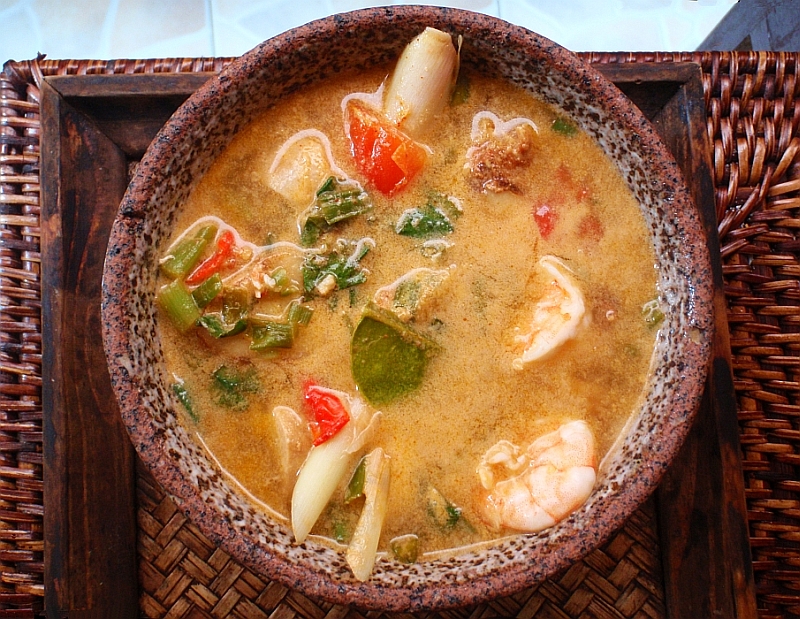 This tasty hot and sour prawn soup is a cinch to make so long as you have the right ingredients. Below is the recipe from my class, though you can opt for a Tom Yum Koong recipe that doesn’t use any coconut milk as well.

2. Add the prawns, cook till tender.

4. Serve hot and garnish with fresh coriander and green onions.

*There is no good substitution for galangal. You can get dried galangal from an Asian grocery store and resuscitate it in warm water.

**This is available in jars at Asian groceries. 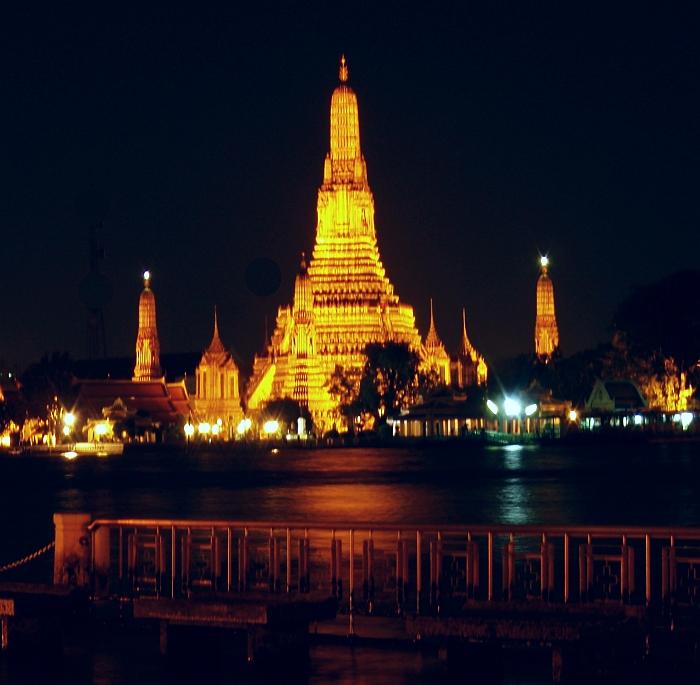 Night view of Wat Arun, the Temple of Dawn, on the Chao Phraya River

After the class, we were able to take the ferry to the dock across the water and get this beautiful view of Wat Arun silhouetted against the skyline.

All good things must come to an end and we finally reached the destination of our cruise. We only had a couple days in Singapore to see the city up close and personal. It was a packed itinerary and unfortunately things didn’t quite work out as planned. 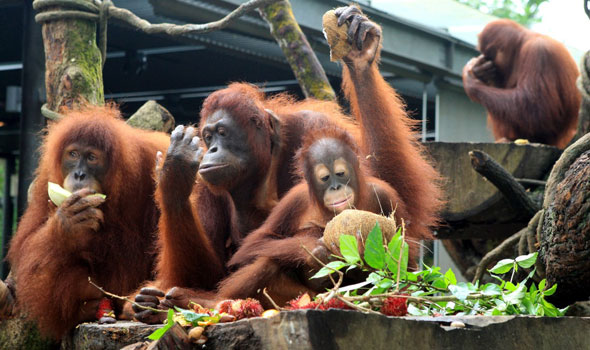 ‘Breakfast with Orangutans’ is a very popular program at the Singapore Zoo.

We were looking forward to our breakfast date with the orangutans at the Singapore Zoo but that required us to be at the zoo by 9 am the morning of our disembarkation.

It took much longer to get from the port to the hotel than expected and we couldn’t get to the zoo in time. So I consoled myself with a picture of what could have been… 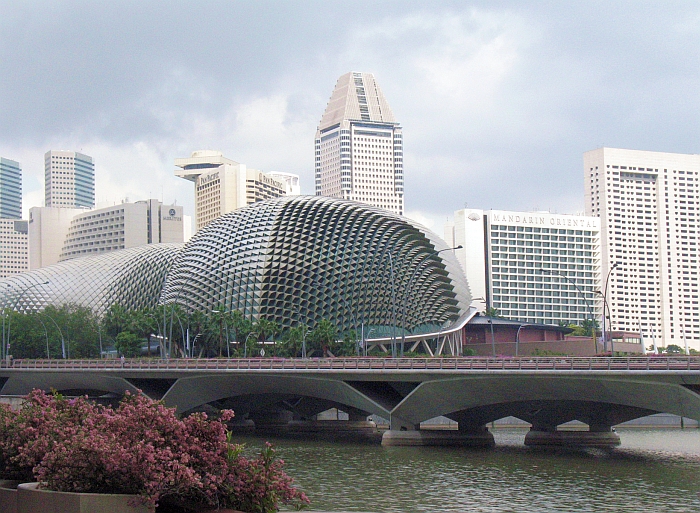 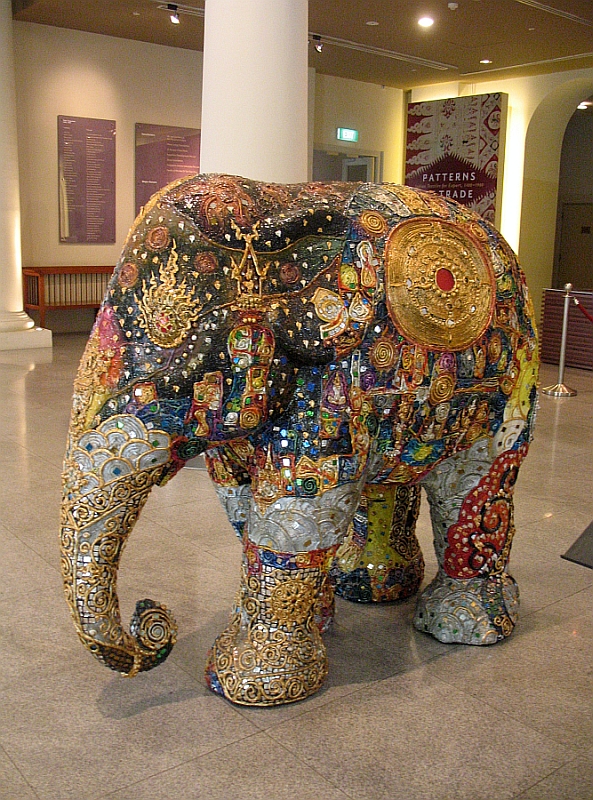 A ‘well-dressed’ elephant at the Asian Civilizations Museum.

We found a pair of elaborately decorated elephants in the lobby of the Asian Civilizations Museum, the meeting point for the museum’s free multi-language guided tours.

Our knowledgeable docent really helped us appreciate the pan-Asia exhibits which were part of Singapore’s rich history and cultural diversity. 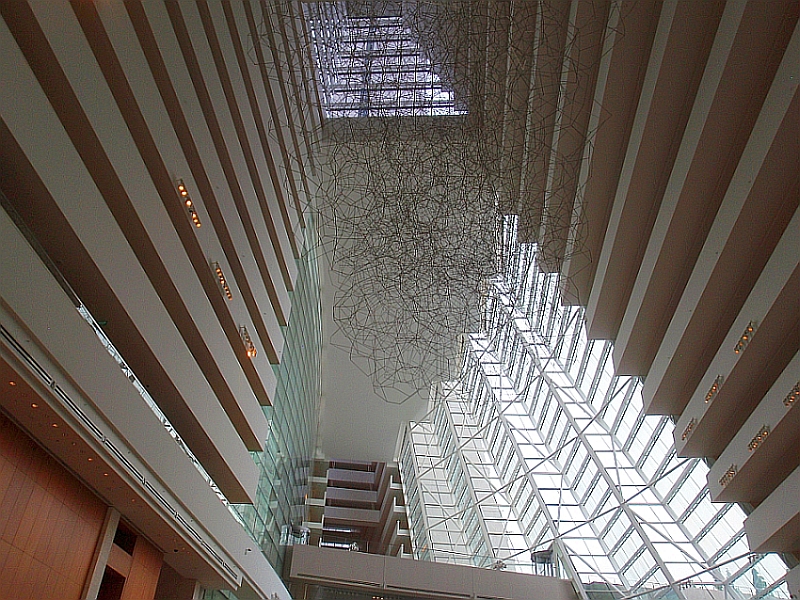 The Marina Bay Sands is an imposing architectural statement. Here is an inside view of one of the 3 soaring hotel towers. 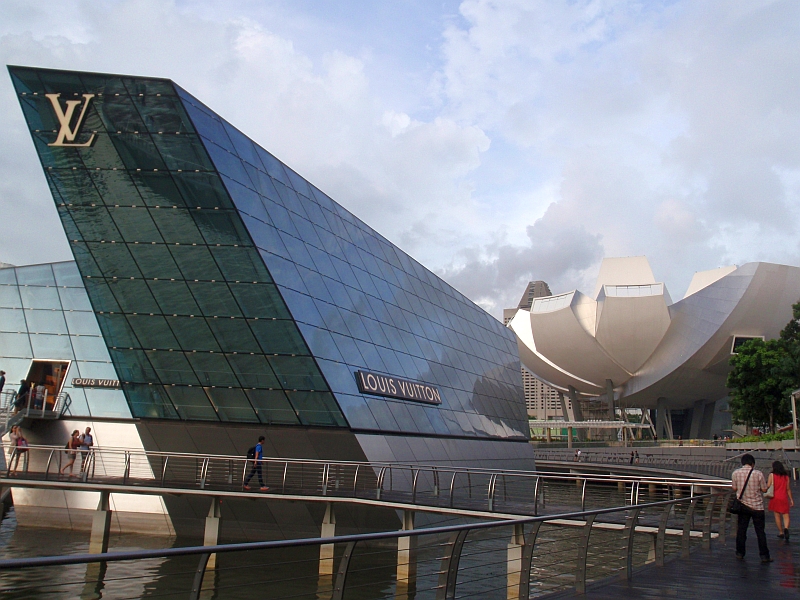 More marquee buildings on the resort grounds: the Louis Vuitton ‘island maison’ crystal pavilion dominates the foreground with the lotus-shaped ArtScience Museum as back drop.

These two buildings show totally different approaches towards light and architecture. The LV floating pavilion, being a glass structure, requires total and sophisticated sun control in order to sell the luxury goods.

The museum on the other hand is of glass fiber reinforced polymer formed into sculptural shapes. Skylights at the tips of the 10 ‘fingers’ illuminate the structure’s curved interior walls, creating an environment with very precise daylighting patterns. 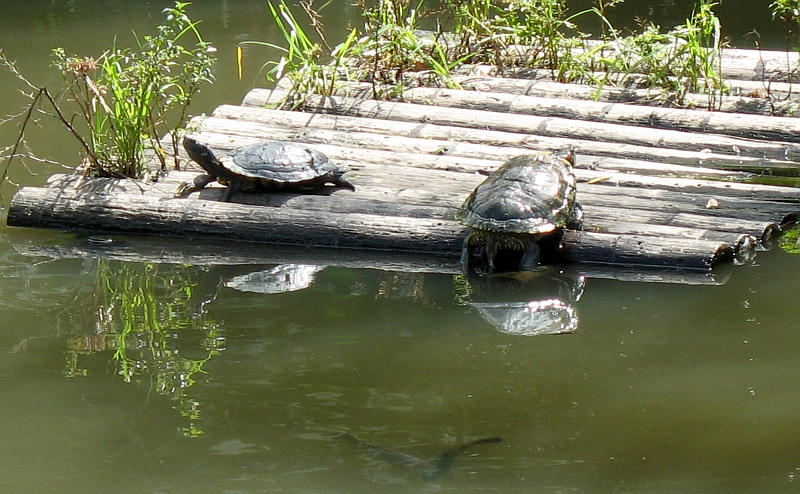 A pair of red eared sliders at the Sungei Buloh Wetland Reserve.

We hired a birding guide for a half day trip to the Sungei Buloh Wetland Reserve. It is a richly diverse habitat.

Aside from seeing a nice variety of birds, we spied a monitor lizard and a croc along the river banks, an otter roll playfully in the sand, a deadly mangrove pit viper lurking in the tree canopy and two turtles hauling out onto a raft to catch some rays! 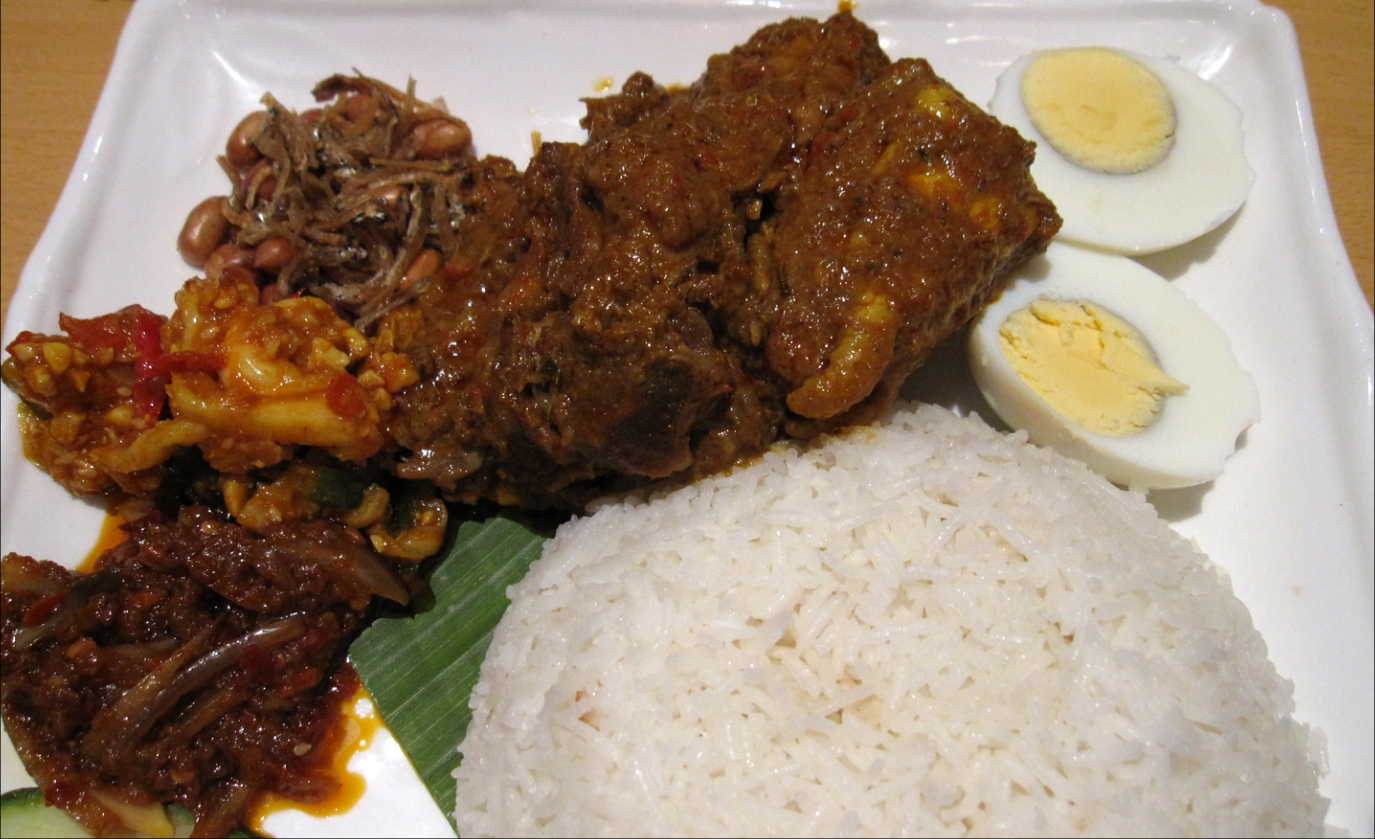 Beef rendang from a hawker stall.

I had beef rendang at a Singaporean restaurant ages ago and it was love at first bite! It is a time consuming dish but the prolonged cooking of the rich spices in the coconut milk adds complexity to the flavors. It’s amazing to bite into chunks of beef that are fork tender yet still retain a slightly chewy texture (no, it wouldn’t hurt anyone’s dentures…).

After several failed attempts to replicate the recipe at home, I was bent on enjoying this labor intensive dish in Singapore. But when researching for this article, I found this authentic looking beef rendang recipe so maybe I’ll give it one more try…

I tried it at every opportunity – from the gentrified food stations at the Marina Bay Sands, to local hawker stalls in the city and found the tastiest morsels at a no frills establishment by an industrial park compliments of our birding guide. They are all different, but good. 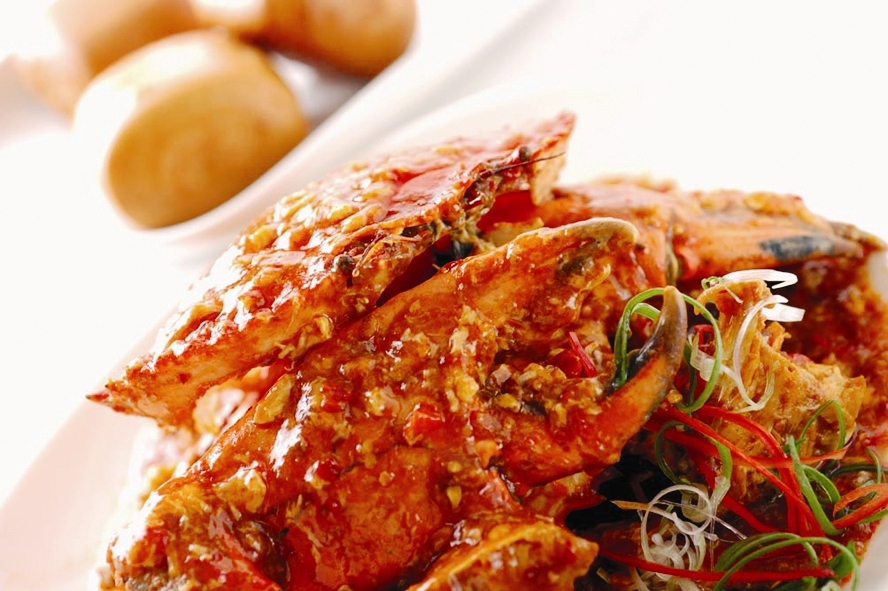 We took the guide book’s recommendation and took a taxi to the UDMC Seafood Centre. It consists of two blocks of restaurants lining the road with their ground floors open to the sea.

Although chili crab and pepper crab are the two most popular dishes, all manner of seafood is available here fresh and is charged by weight.

We chose Jumbo Seafood by virtue of its air conditioning in the upstairs section. It sounds silly but then at the end of a long sweaty day, I decided to rearrange my priorities. The food was OK given its popularity with tourists and sheer size. Naturally we’ll be looking for other choices next time…

Considering chili crab is the defining Singaporean dish (side by side with Hainanese Chicken Rice), here’s a recipe for the World’s BEST Singapore Chili Crab recipe by Chef David Parry, though Chef Parry didn’t seem to have worked in Singapore, he has impressive cooking creds!

Angry Birds at the Singapore Airport

We got to the airport at the ungodly hour of 5 am for our flight home and were surprised to be greeted by Angry Birds in Holiday scenes over the airport entry doors. There is apparently no escape from the i-culture…