I often fantasize about giving up our typical frog-marching vacations to invest in some quality time chilling at sidewalk cafes – which happens every time we scurry harriedly past the packed café-lined sidewalks, be it at Rome or Rio!

Of course when I started planning the itinerary for our 15 night Trans-Canal cruise, all such thoughts went straight out the window and it morphed into an odyssey with 13 stops in 7 countries over 4 weeks… This is the first of my multi-part blog post that shares my trip’s highlights and covers Cartagena, Colon as well as the Panama Canal transit.

After overnighting in Everglades City we boarded the Celebrity Infinity, our home away from home as we sailed from Fort Lauderdale to Valpraiso, Chile. Our first stop was Cartagena, Colombia. I booked a photography tour with photojournalist Joaquin Sarmiento to shore up my literally and figuratively shaky photographic skills.

Once racked by drug violence Cartagena is now relatively safe. The tour wound through some gritty areas but these scruffy barrios are rapidly getting spiffed up. What I was totally unprepared for was the technicolor architecture that greeted us around every corner. 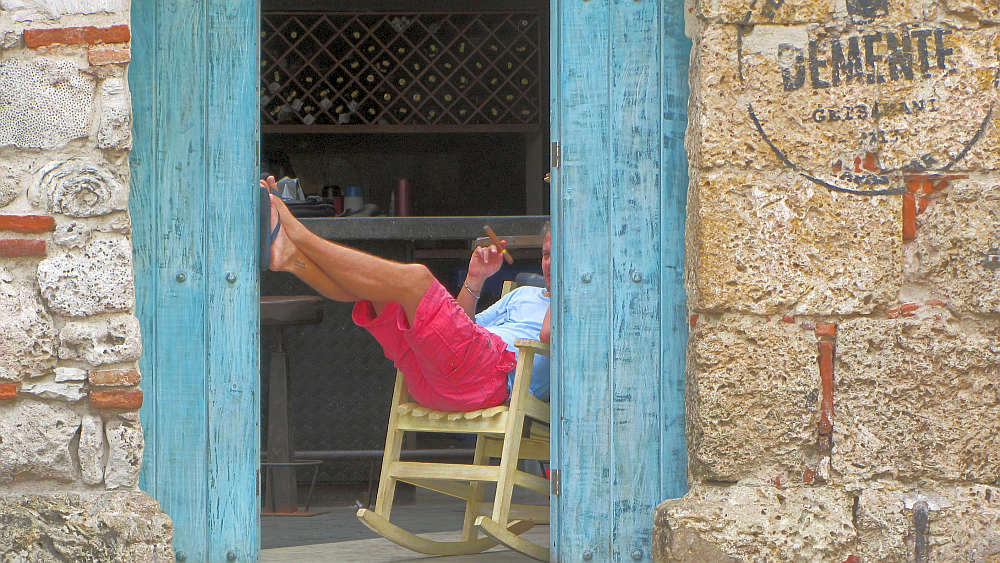 Man in wine shop with a stogie.

This store with aqua blue doors is in the once rough-and-tumble blue collar district of Getsemani which is quickly transforming into one of the hottest places to see and be seen. 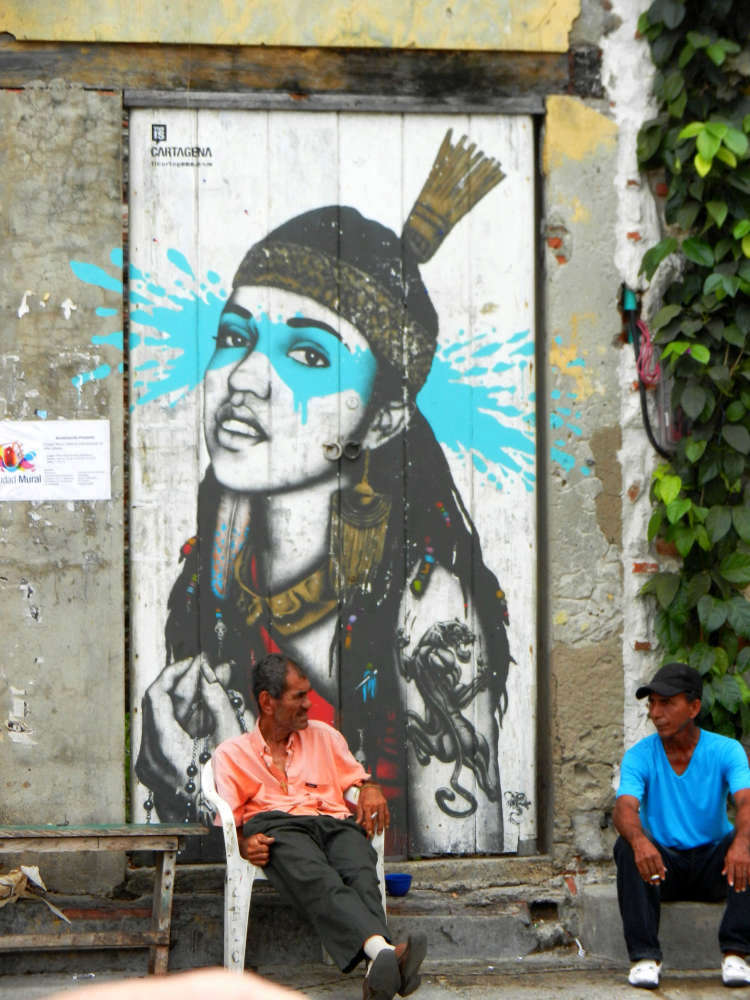 Celebrated for its street art, Getsemani became the site of the First International Festival of Urban Art, ‘Ciudad Mural’ in 2013. This is probably fin DAC‘s rendering of the Indian princess, India Catalina, who figured prominently in Colombian history. 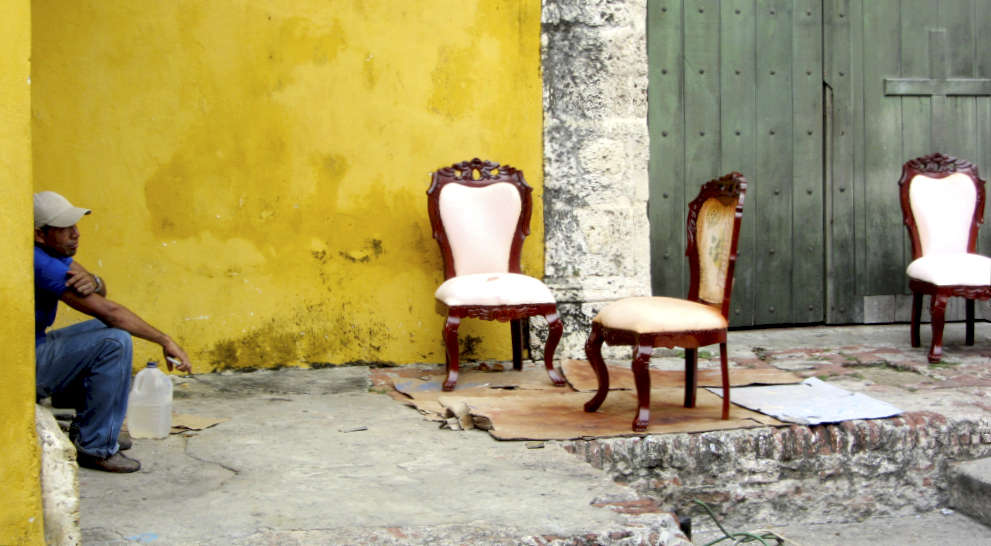 Worker with chairs being refinished in the street.

I love the contrast of colors between the mahogany stained chairs, ochre walls and blue gray doors. With all the overspray it looks like the chairs will be need to be reupholstered after this! 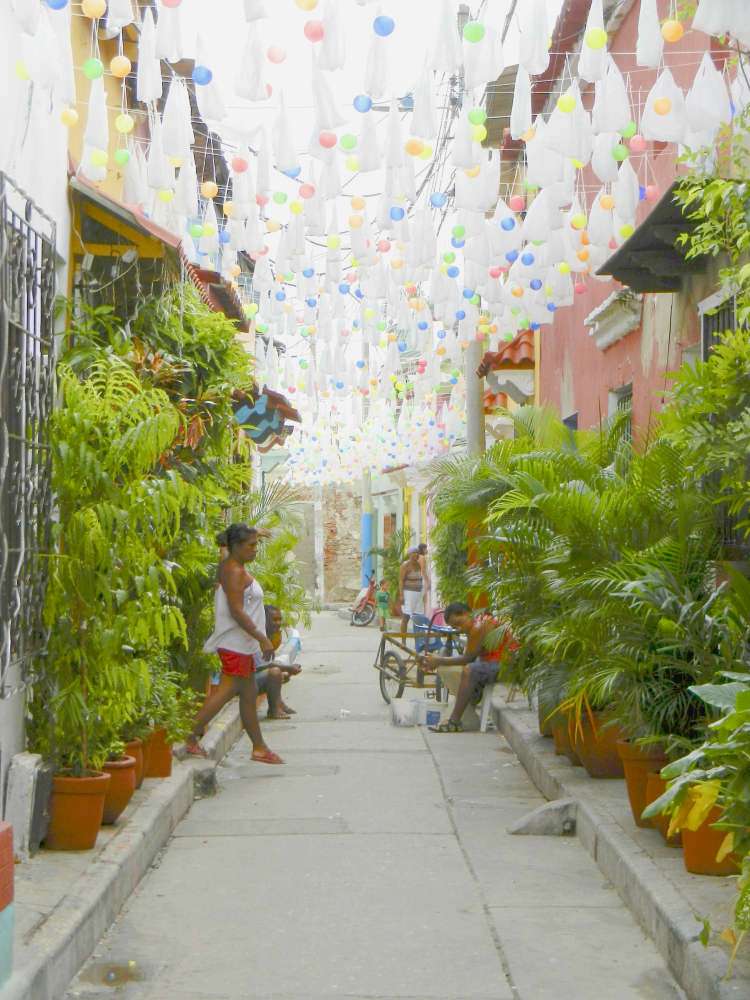 Christmas decorations in the barrio.

The enterprising locals created Christmas decorations from accessible goods. Some alleys were decked out in plastic bags and colored balls hung from a grid of strings, while others sported festive wall-to-wall plastic banners down their lengths. 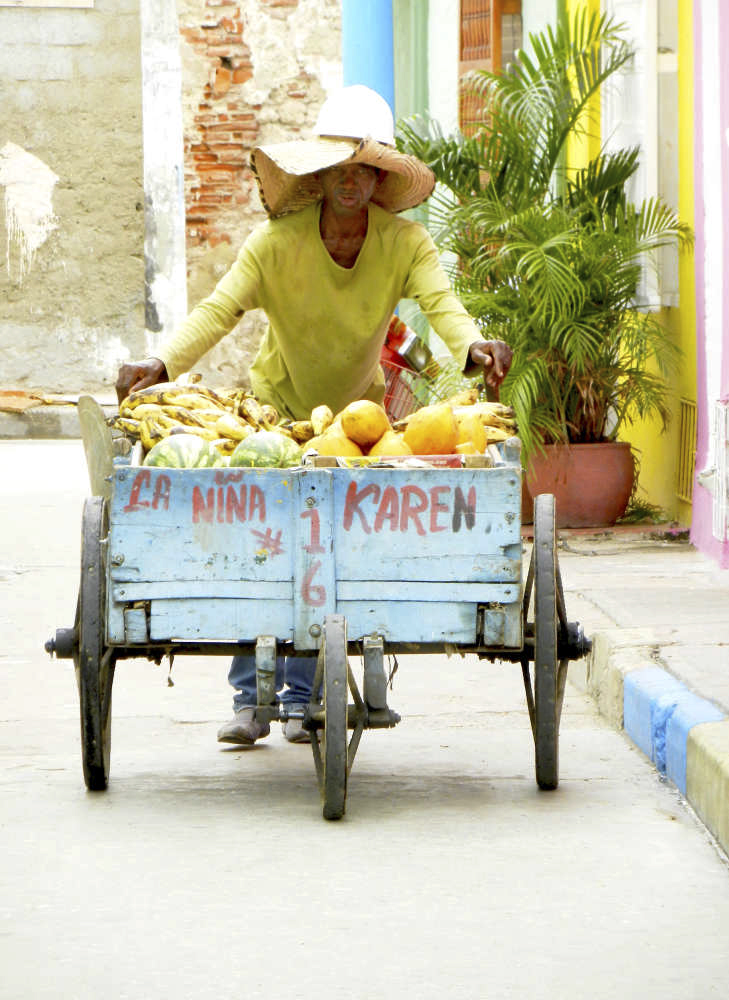 Fruit vendor with a traditional pushcart.

This vendor coming down the passageway was hard to resist. Of course he wanted to get paid for walking past us but Joaquin convinced him otherwise. 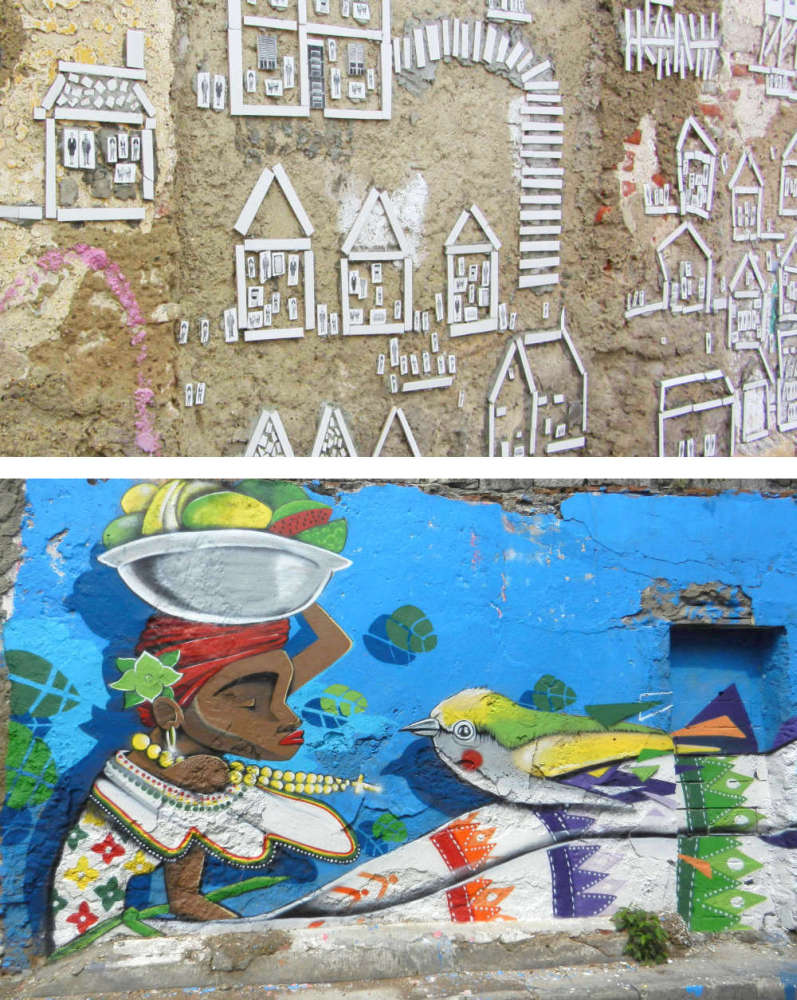 More samples of street art from the graffiti festival.

As the Ciudad Mural focuses on local themes, the top piece is a ‘map’ collaged from photos of families in the neighborhood. The other one shows a palenquera, the ubiquitous street vendor of Cartagena. 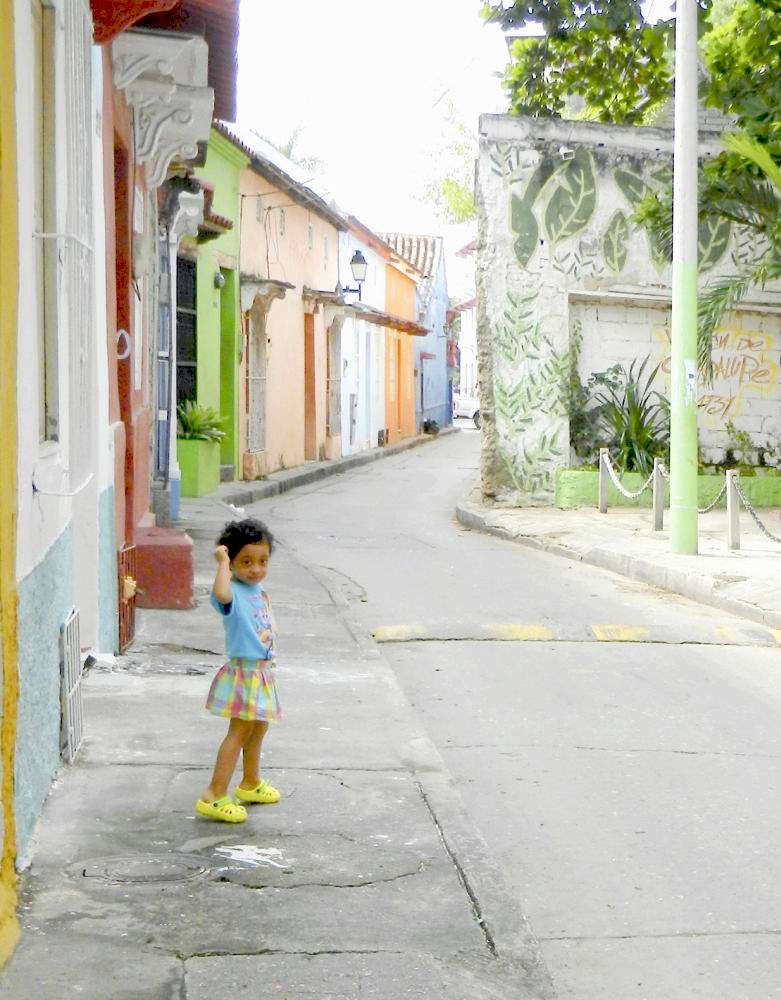 Child in a polychromed street of Getsemani.

The street with its multi-hued houses made a befitting backdrop for the colorfully dressed little girl. 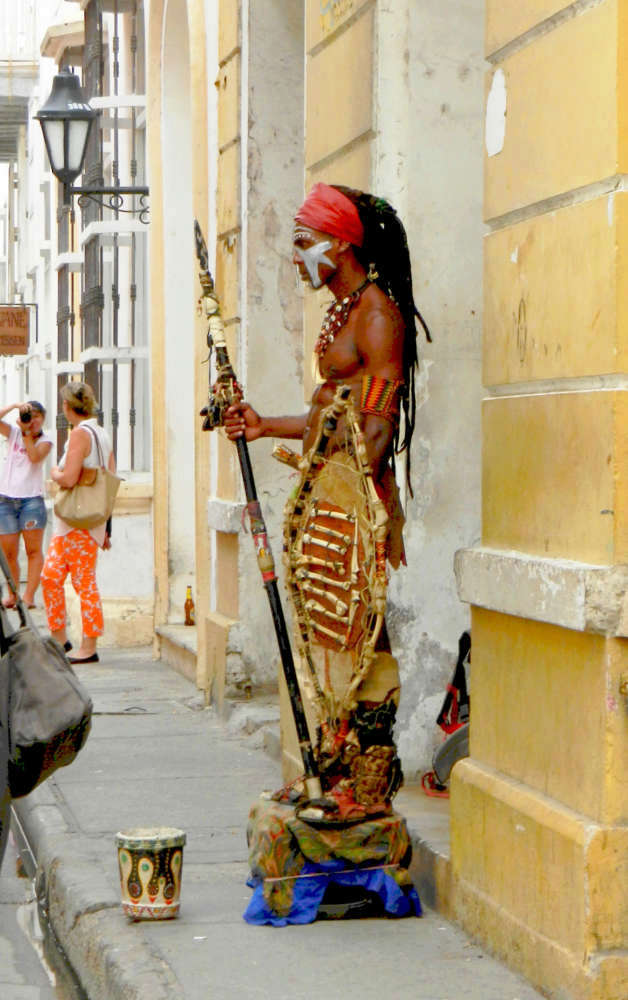 Street entertainer in the historic center.

The city center is pretty touristy but I was still somewhat surprised find a living statue performer in full Indian regalia busking for money. 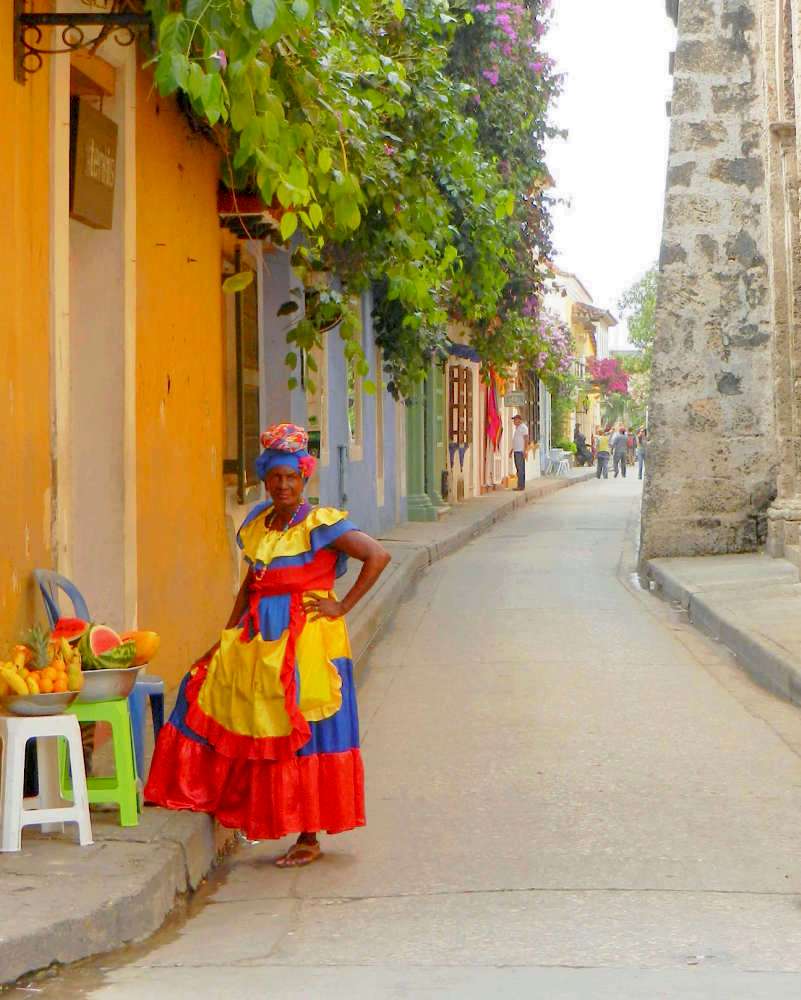 A fabled palenquera parked at a street corner of the old town.

The palenqueras historically came from San Basilio De Palenque, the first city in S. America with free slaves. These ladies wear colorful dresses and often carry bowls of fruits on their heads. 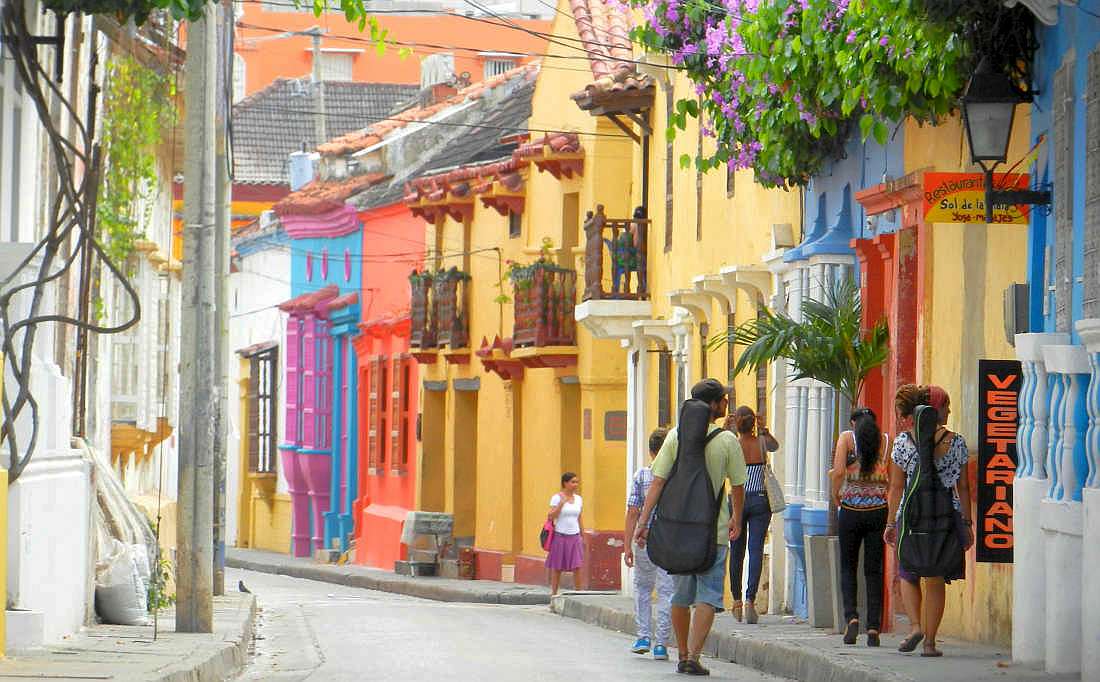 The barrio of San Diego is another district bursting with vibrant colors.

San Diego is where Joaquin lives. It’s a charming neighborhood in the outer walled city like Getsemani but more quaint and urbane. 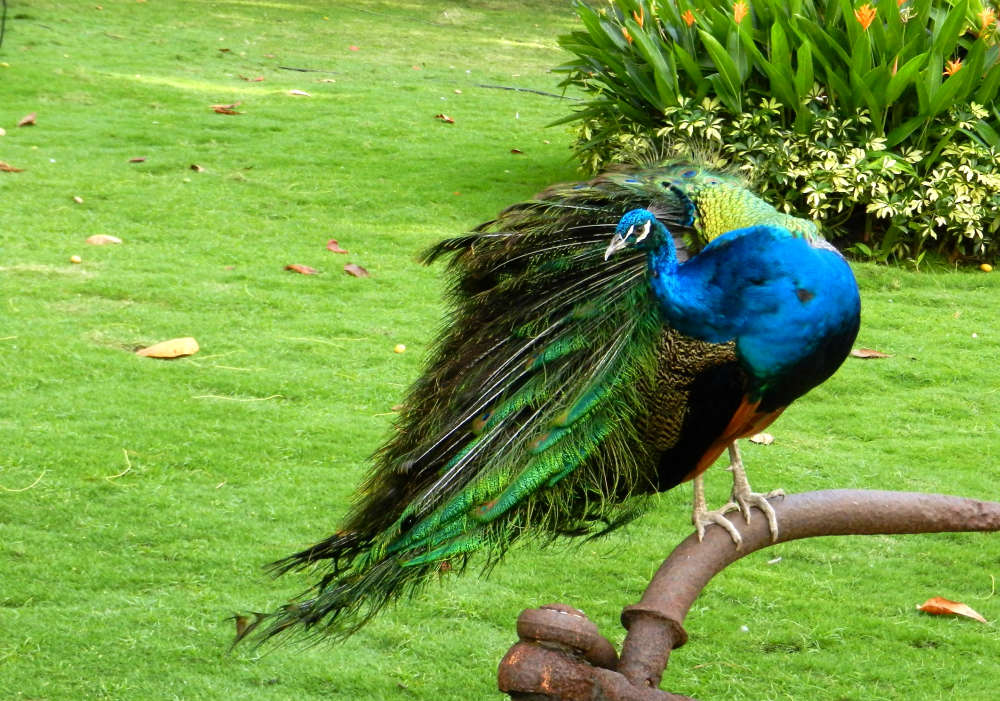 Preening peacock in a park by the port.

There were some macaws, flamingoes and peacocks roaming around the port complex as ‘tourist attraction’. This peacock was busy strutting its stuff but the female remained nonchalant. 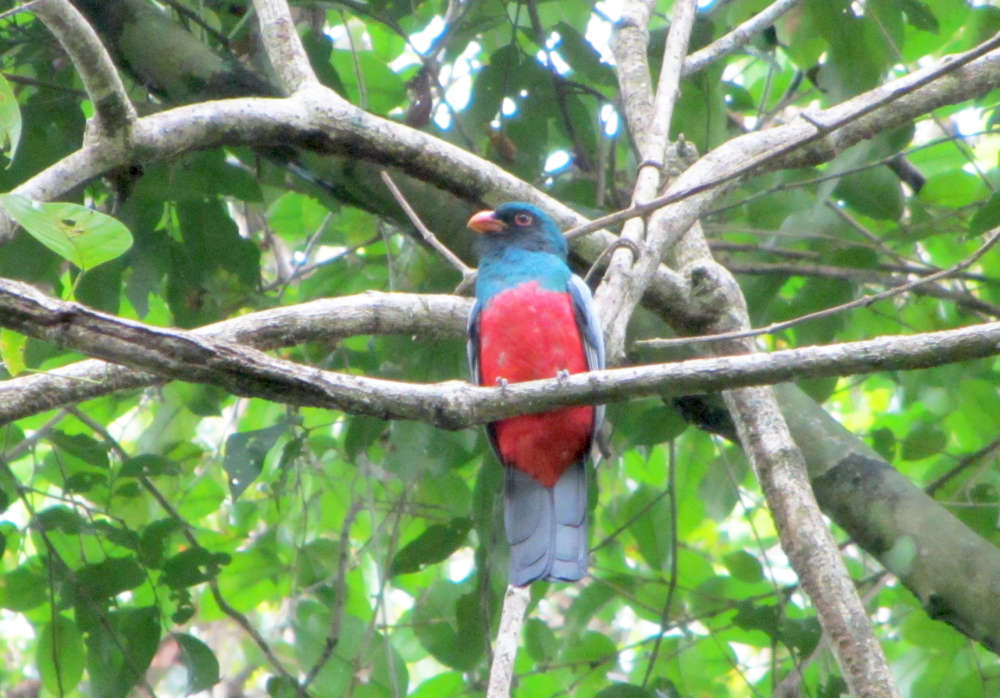 A slaty-tailed trogon in the aptly named Trogon Trail.

The next port was Colon, Panama. We booked a bird/nature walk with René Guardiola, a local tour operator. Given birds and wildlife are most active in the early morning, we knew starting around 10 am was less than ideal. But we hadn’t counted on the driver first being MIA (our guide had to hunt him down with binoculars) and then getting lost trying to leave town. It turned out to be one of our least productive and most overpriced nature tours.

We only saw a handful of birds, couple frogs, sloths, howler and capuchin monkeys – of course you can always count on finding howlers and sloths unless the guide is absolutely incompetent… As the site of Panama Audubon Society‘s Christmas Bird Count, where up to 340 species can be found within a 24-hour period, this was an abysmally pathetic showing. 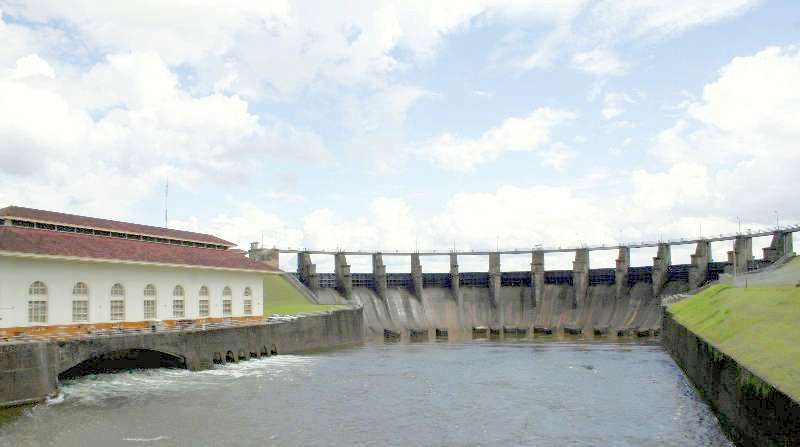 Concrete spillway of the Gatun Dam.

On the way back to the ship, we got a view of the overflow from Gatun Lake into the ocean. This is the biggest dam along the Panama Canal. 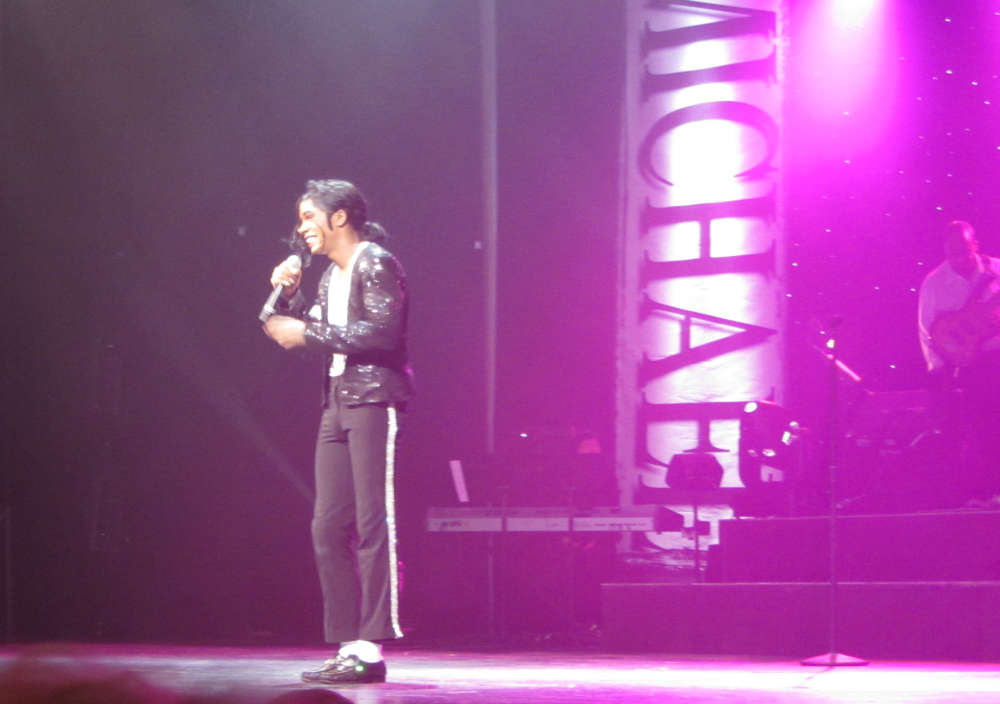 Billed as a Michael Jackson illusionist, ICE did an excellent job performing the King of Pop’s greatest hits. 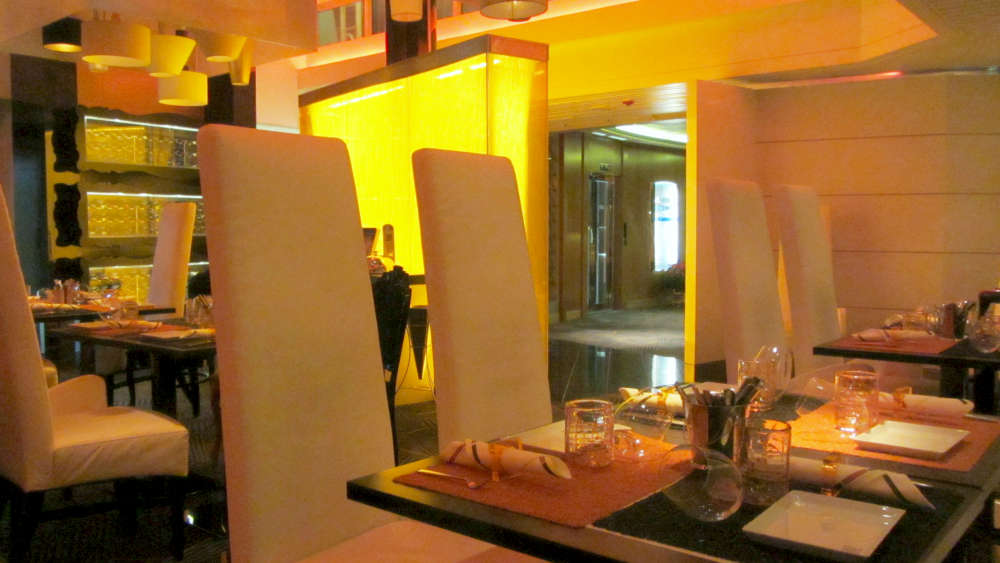 Interior of one of the ship’s specialty restaurants, Qsine.

Since meals in standard dining venues are included with the cruise, specialty restaurants proliferate because they provide opportunities for the ships to up sell food and beverage services. As an interior designer, I appreciate the cool, contemporary look of Qsine. 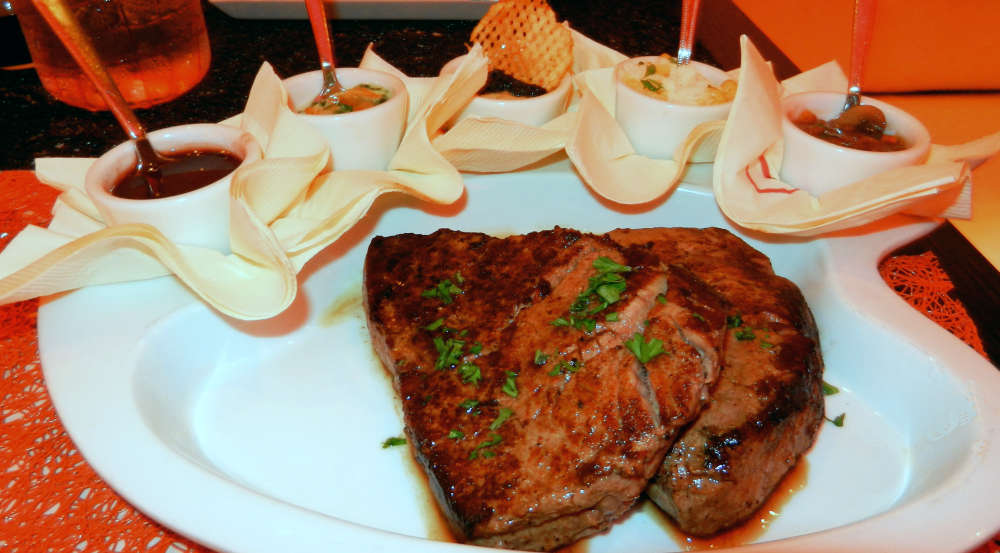 Painter’s Mignon is filet mignon served with 5 accompaniments, one of the numerous dishes on the tasting menu.

The ship aggressively promoted its specialty restaurants but our experience with Qsine was disappointing. The chef seemed to have devoted more time on food presentation than execution. We had insipid soups, overcooked salmon and soggy soufflés. The random, sporadic service didn’t help… 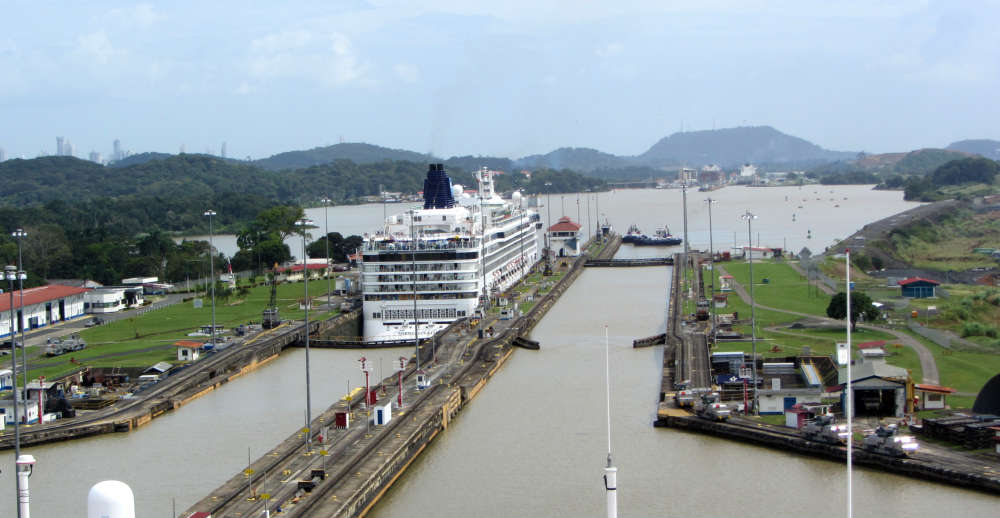 The first of the double gates swung open for our ship to pass through. Coincidentally, NCL’s mammoth Norwegian Star was in the opposite lane waiting for its turn to proceed. 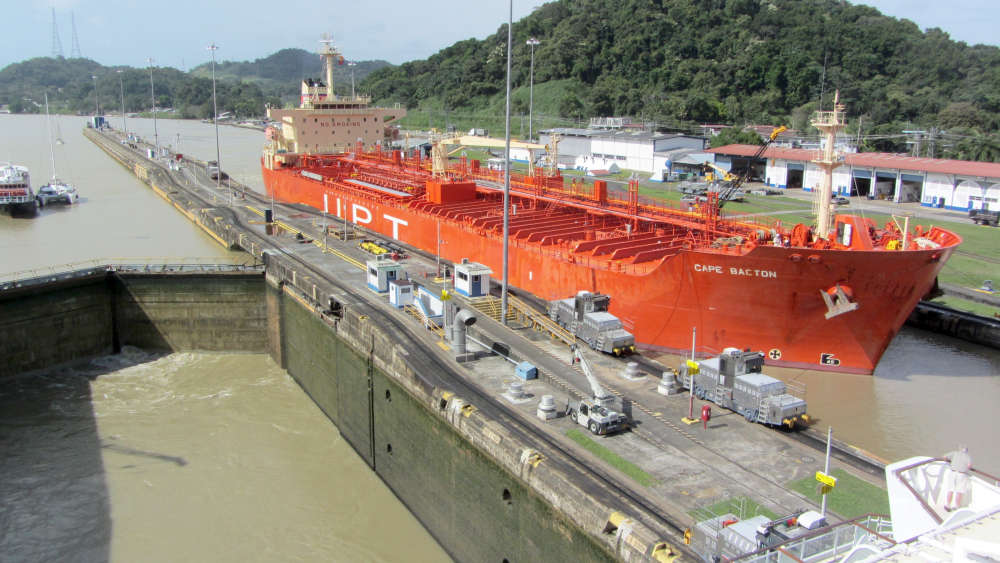 Our ship leaving the Miraflores locks.

This was a departing shot from the stern of the Infinity. The neighboring cargo ship clearly shows the difference in water levels between the 2 lanes. Unlike the single-step Pedro Miguel locks, ships in the Miraflores locks are lifted up (or lowered) in 2 stages.