Since our ship was overnighting at Avignon, we decided to explore the area around the quai. We crossed a bridge and was surprised to find ourselves on Île de la Barthelasse (Barthelasse Island), which I had planned to visit earlier but unfortunately ran out of time. 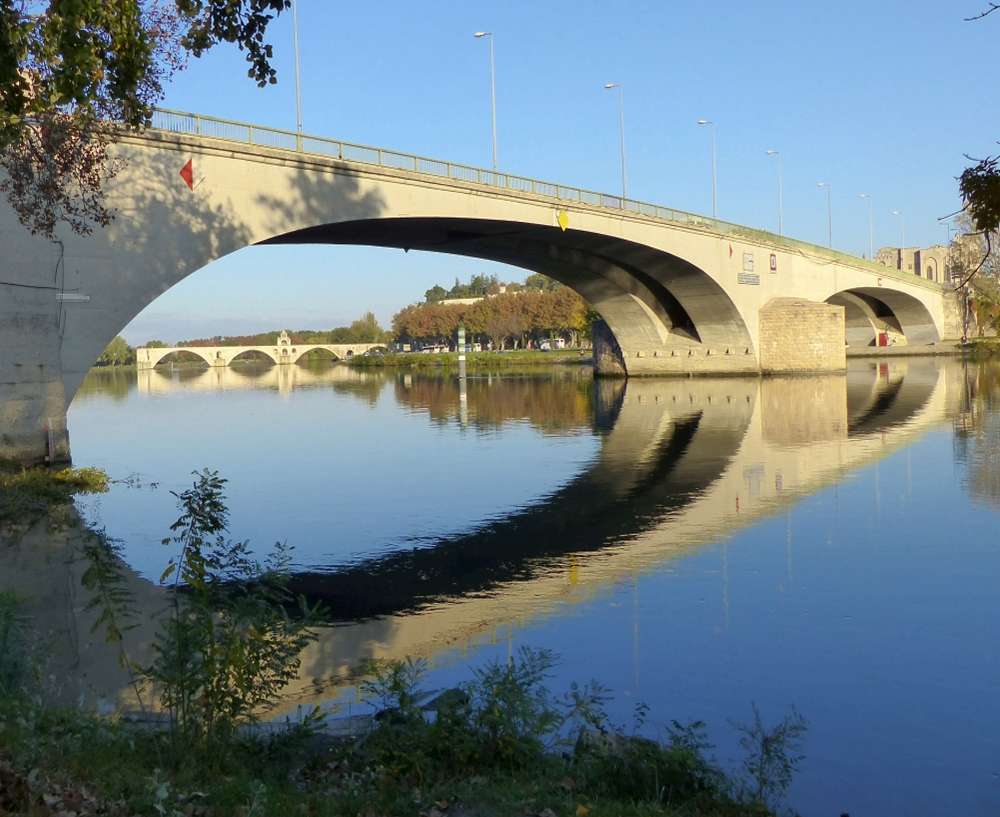 View of the famous Pont d’Avignon (Avignon Bridge) through the arch of neighboring Pont Édouard Daladier.

Pont d’Avignon was popularized by the 15th century French children’s song Sur le Pont d’Avignon. The bridge itself is an oddity – it stops in the middle of the Rhône as the end that was destroyed by a prior flood was never rebuilt.

It was hard to grasp the scale of the Palace when we stayed inside the old town. Walking back towards the city gave us a new appreciation of the massive papal residence and its well-preserved ramparts. 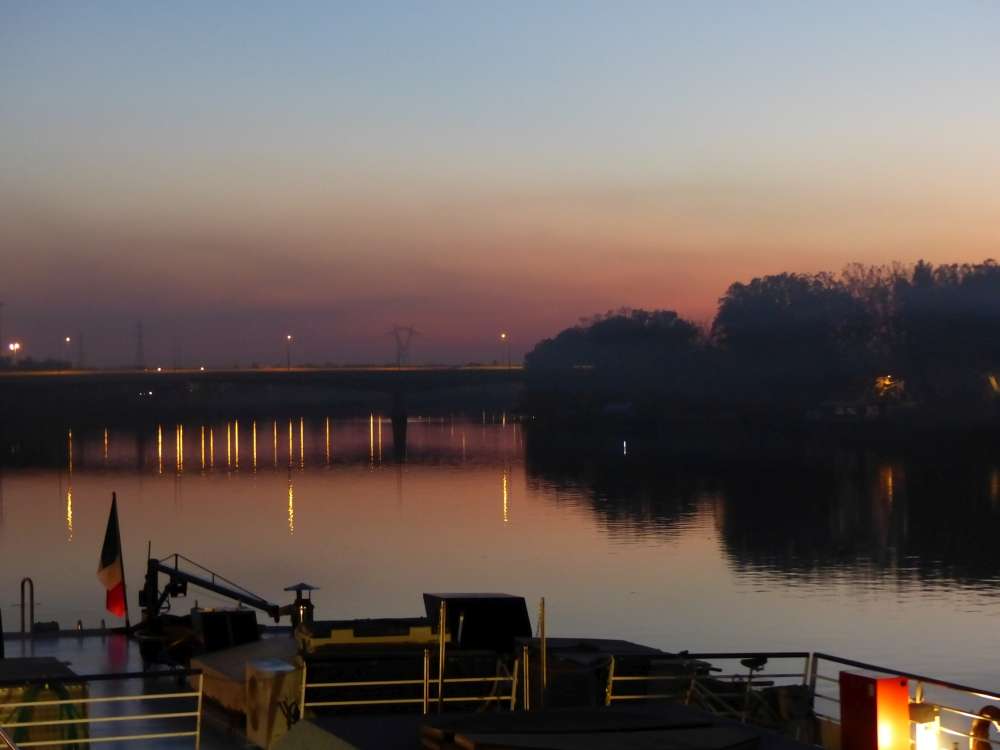 View of the Rhône from boat.

As dusk settled over the river, the sky was a mélange of lavender, orange, and purple. Peculiar to river cruises, one may find several boats tied up alongside each other during busy times. Luckily this was not the case so we were able to enjoy the scenery in peace. 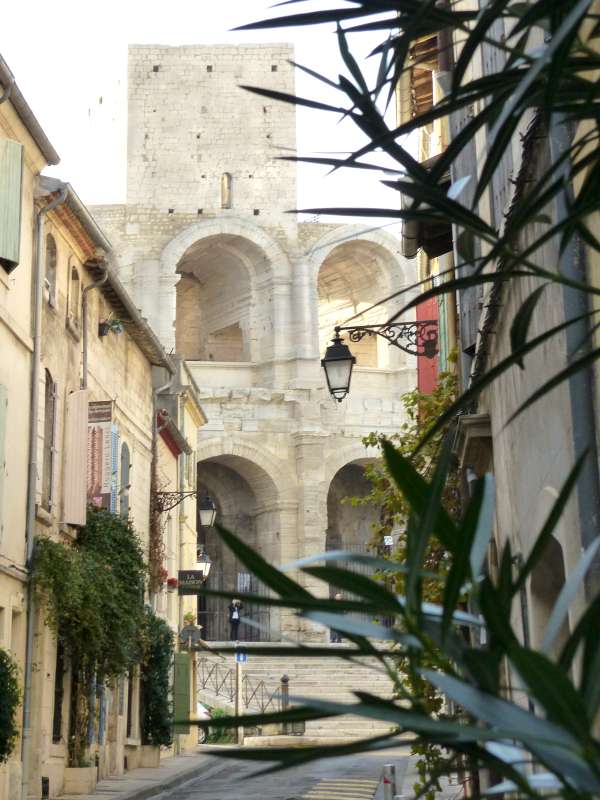 A peak at the amphitheatre in Arles.

Once disembarked at Tarascon, we were quickly whisked off to Arles, whose collection of Roman & Romanesque monuments are listed as a UNESCO World Heritage Site. The 2-tiered amphitheatre was built in 90 AD, but the towers on top of the arcades were later additions. 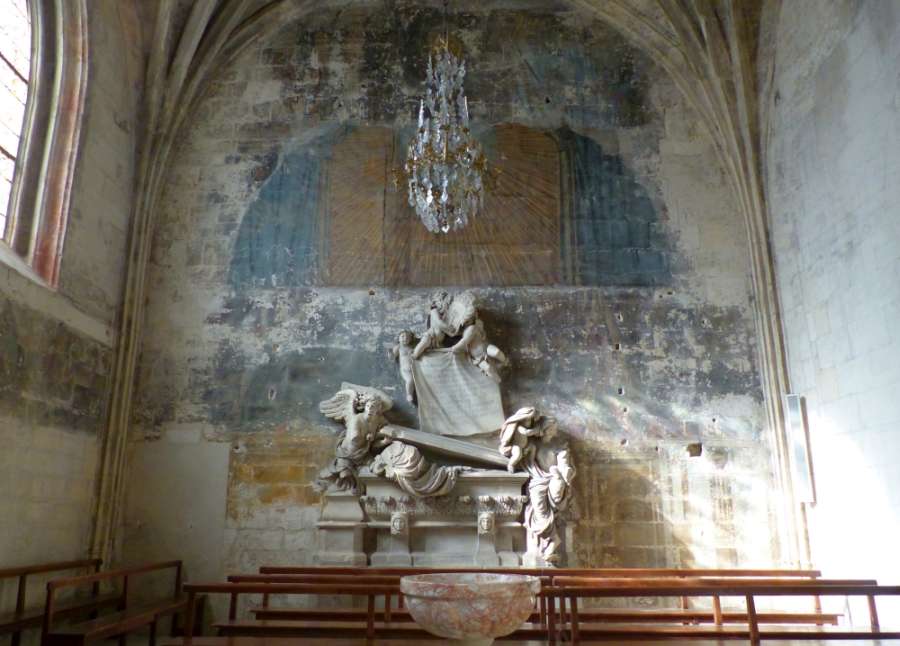 A church that bore witness to the French Revolution.

The faded painting of this side chapel in Eglise St-Trophime (Church of St-Trophime) dates back to 1789, the beginning of the French Revolution. Painted on the wall behind the chandelier is a triangle within a sunburst design that denotes the primacy of reason over religion, the mantra of the Revolution. 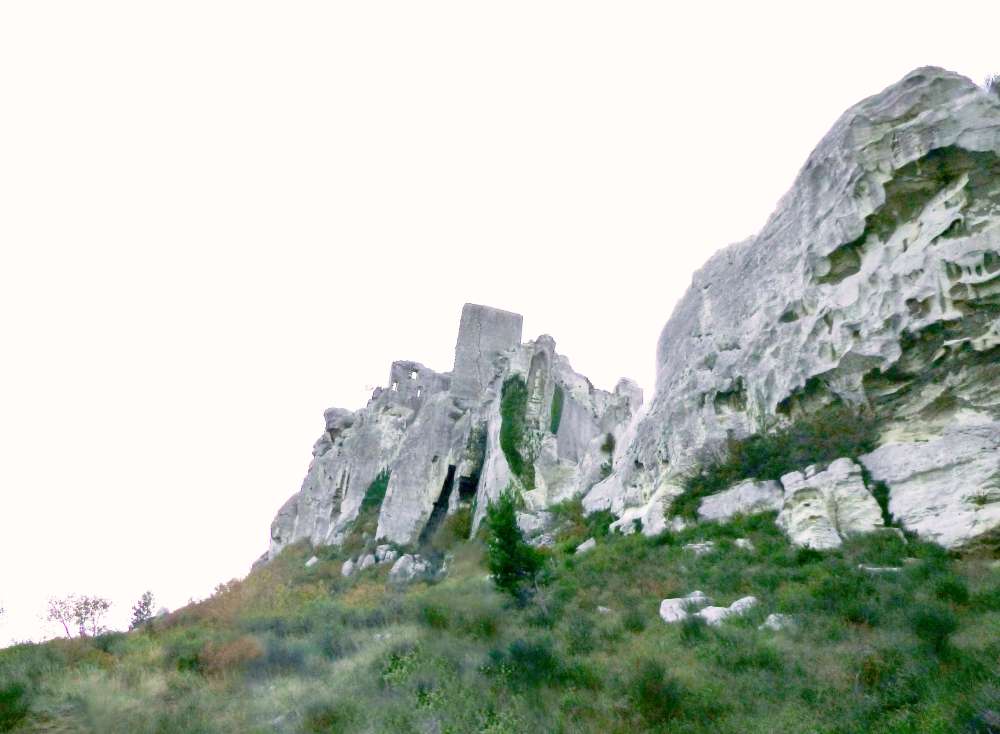 Dwellings and fortifications carved into the wind swept limestone outcrop.

Fifteen kilometers from Arles is the fortified village of Les Baux-de-Provence. The brooding, desolate moonscape, called Citadale de la ville morte (Castle of the Dead City), is a testament to its turbulent past. By contrast the remaining 16th century stone houses in the village are beautifully preserved by the residents and turned into picture-perfect shops, galleries, and restaurants. 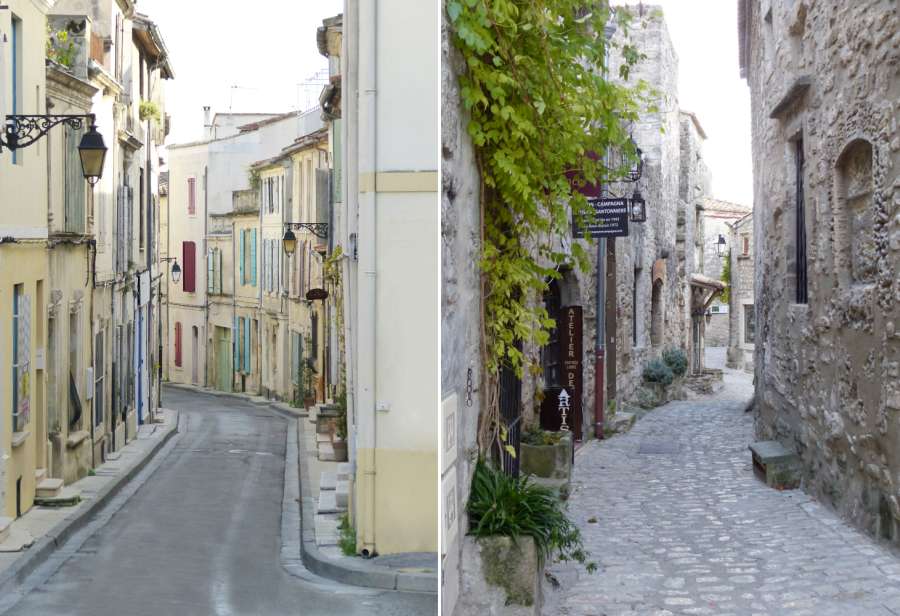 The streets are a study in contrasts between the architecture of Arles (left) and Les Baux (right).

Streets from Arles and Les Baux are charming in their own rights, but I find the latter’s rough-hewn limestone buildings and car-free cobblestone streets more appealing.

We heard bagpipes and drums and eventually tracked down this band of jugglers and musicians wending their way through the alleyways of the castle. We weren’t sure what the occasion was for, but it was fun while it lasted! 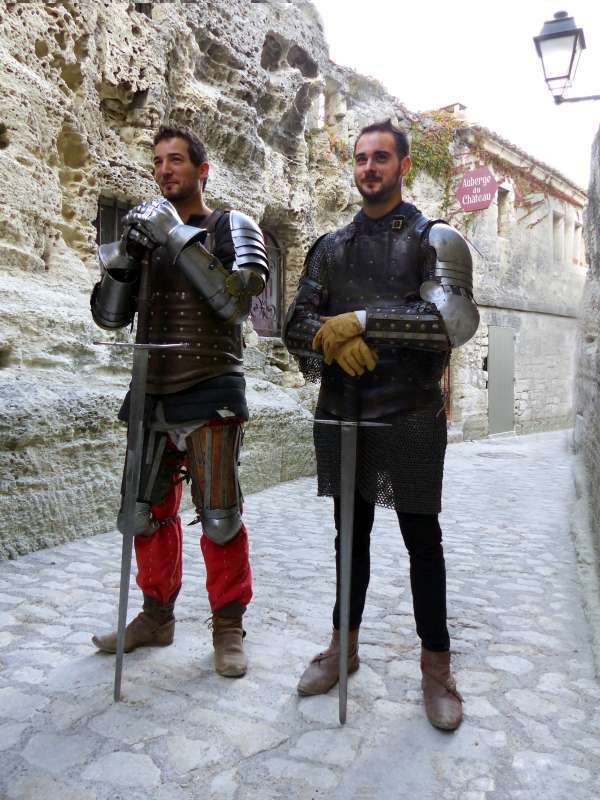 A couple of handsome knights in shining armor.

No, I did not try to take any pix with them. It was entertaining enough and I didn’t want to press my nominal French! 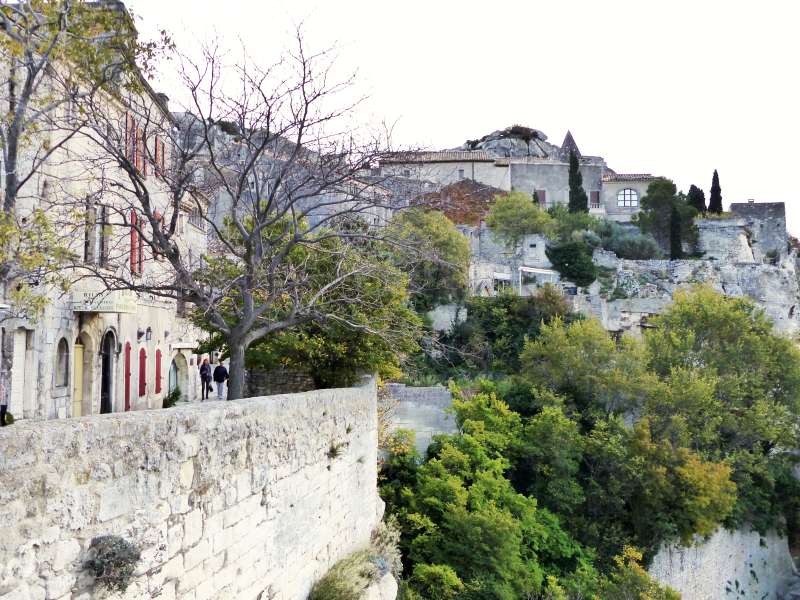 Parting look at Les Baux’s living museum and ghostly ruins, a haunting dichotomy that made it irresistible to millions.

There is an advantage to visiting Les Baux in the off season – one can check out the historic sites and enjoy the village’s diversions at leisure without having to contend with the ghastly hordes.

On leaving Arles, we headed for the Saint-Paul-de-Mausole monastery on the outskirts of Saint-Rémy-de-Provence. This was the asylum where Vincent van Gogh committed himself voluntarily from 1889-1890 shortly after a violent confrontation with his friend Paul Gauguin.

Plantings on the grounds of the monastery.

The gnarled and tangled tree somehow brings to mind the iconic works and tortured life of Van Goh.

At the psychiatric institution, Van Gogh had two cells with barred windows, one of which was used as a studio. It was also one of his most prolific periods. 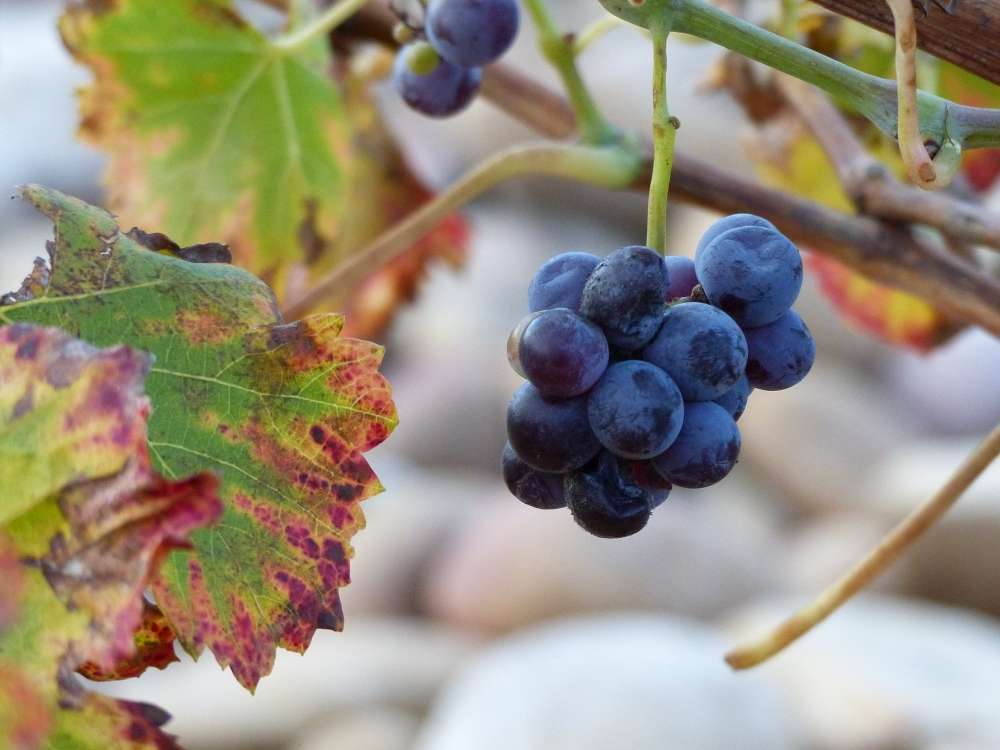 All things vine and wine were the focus of this tour and we weren’t disappointed.

The following day was an optional excursion to Châteauneuf-du-Pape. The group first tended to the most important business at hand: wine tasting. After a brief course on AOC, grape, and wine tasting 101, we finally got to sample the offerings. Though 95% of the appellation’s production is red, we were invited to try their white wine. Later we toured the ruins of a medieval castle perched high above the vineyards and then checked out the village with our free time. 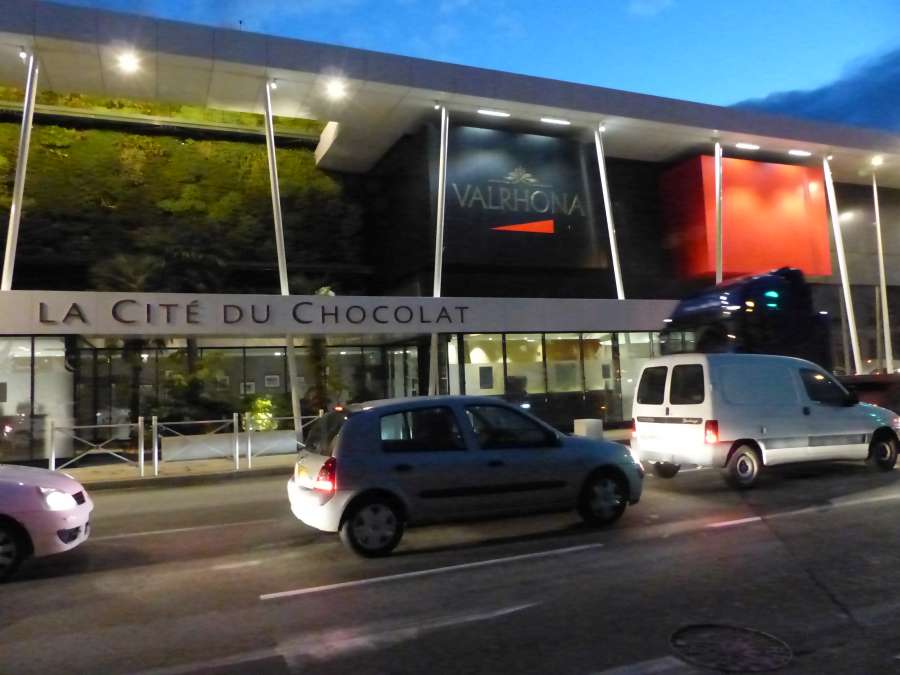 The highlight of our next port was a visit to Cité du Chocolat Valrhona. This is a chocolate themed interactive museum, laboratory, factory, restaurant and mega boutique all rolled into one. We only had time for the chocolate tasting, but that would have been the most fun anyway! Great prices, unlimited samples, amazing flavors. Chocolate lovers would have thought they’d died and gone to heaven…