Kyoto is steeped in Japan’s feudal past and possesses an amazing number of World Heritage sites. The heat wave rolled on for a second day but we were hell-bent on a mission with limited time. Our itinerary was packed: we toured the studio home of Kawai Kanjiro, a giant in the Japanese folk art movement and pressed on briskly through the UNESCO sites of Ginkaku-ji, Kinkaku-ji, Nijo-jo and Fushimi-Inari, stopping only for a quick bite along the way. 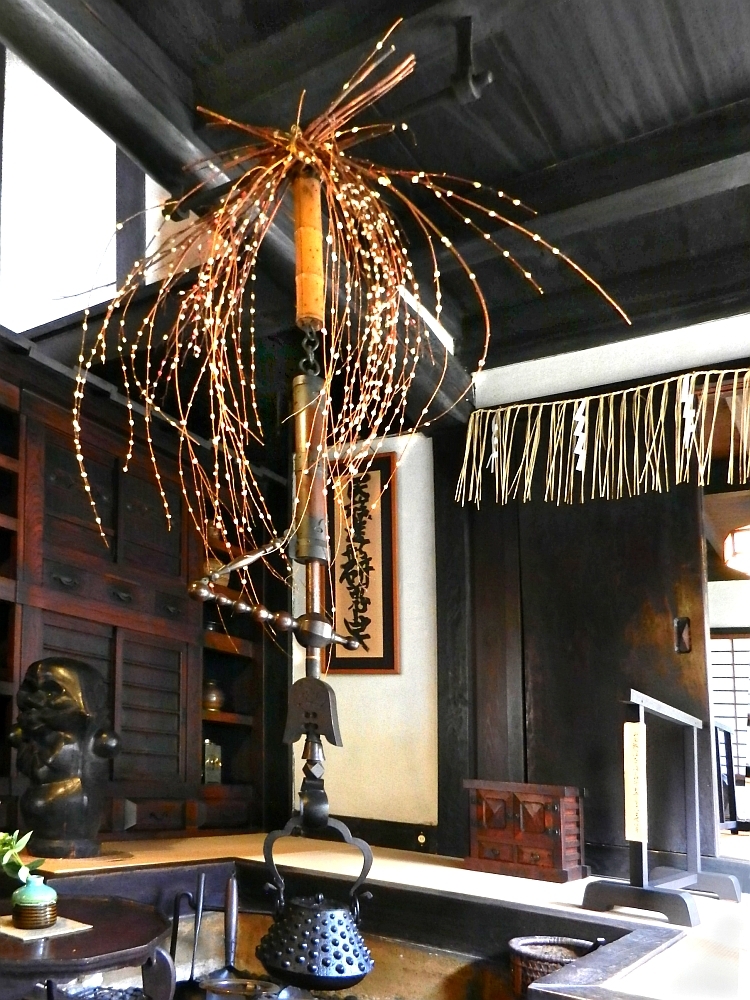 A simple but striking arrangement of bamboo and pussy willows adorning the chagama (tea kettle) suspended over the sunken hearth in the center of the Kawai Kanjirō Memorial House. 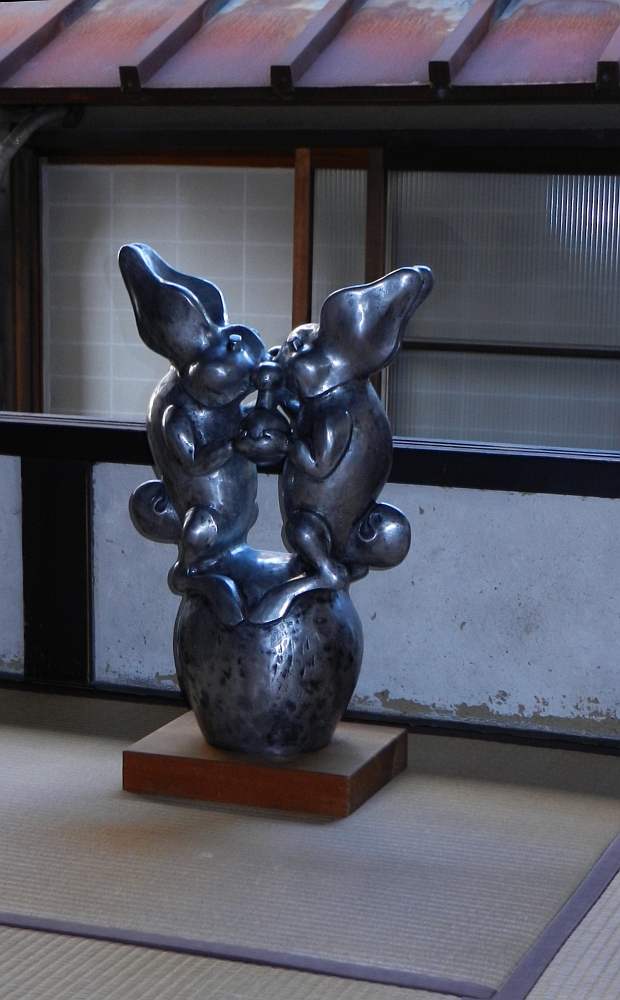 A sculpture in the museum.

Kanjirō was also an artist, calligrapher and sculptor and grew increasingly unconventional in his later years. This piece somehow reminded me of the Mad Hatter in Alice in Wonderland… 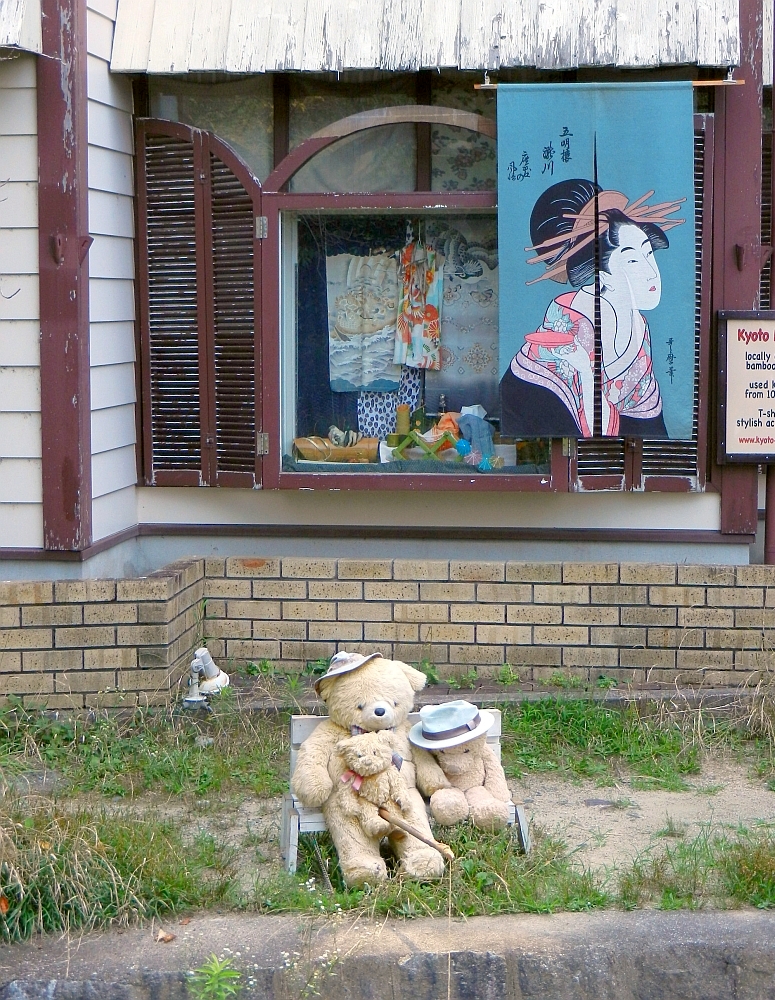 We strolled through a tree lined street along the canal called the Philosopher’s Path. The sight of those ephemeral cherry blossoms in spring apparently inspired many a philosopher over the ages! 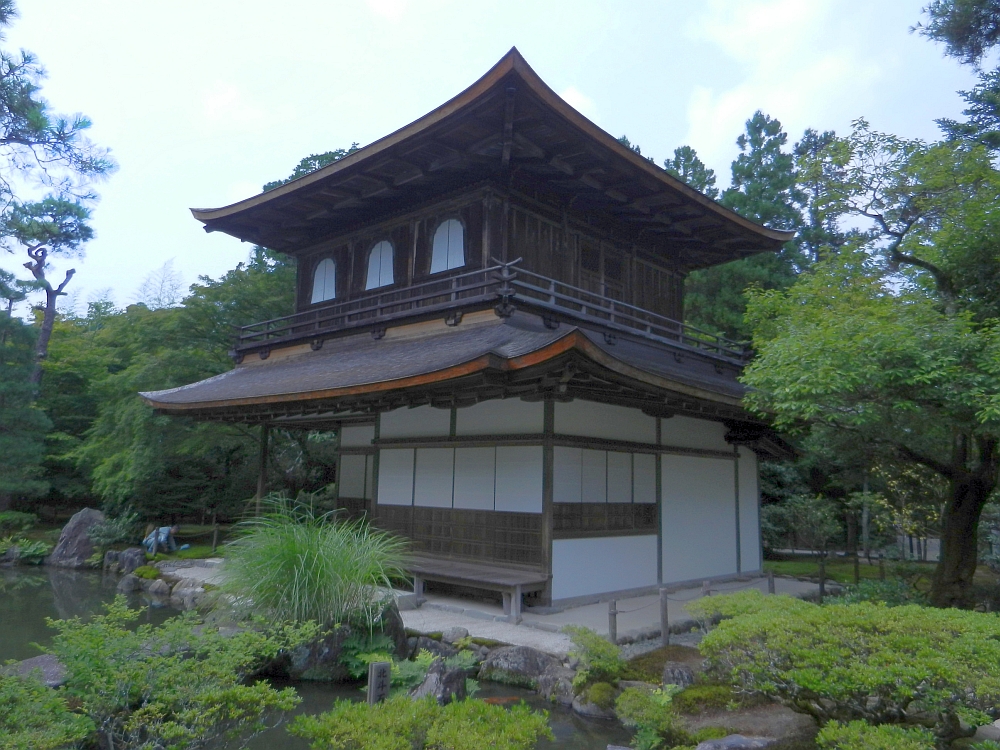 Ginkaku-ji (Temple of the Silver Pavilion).

Despite its name, Ginkaku-ji never got its silver coating as Ashikaga Yoshimasa the shogun who commissioned the temple died before its completion. For some reason, the pavilion’s two stories were in different architectural styles. 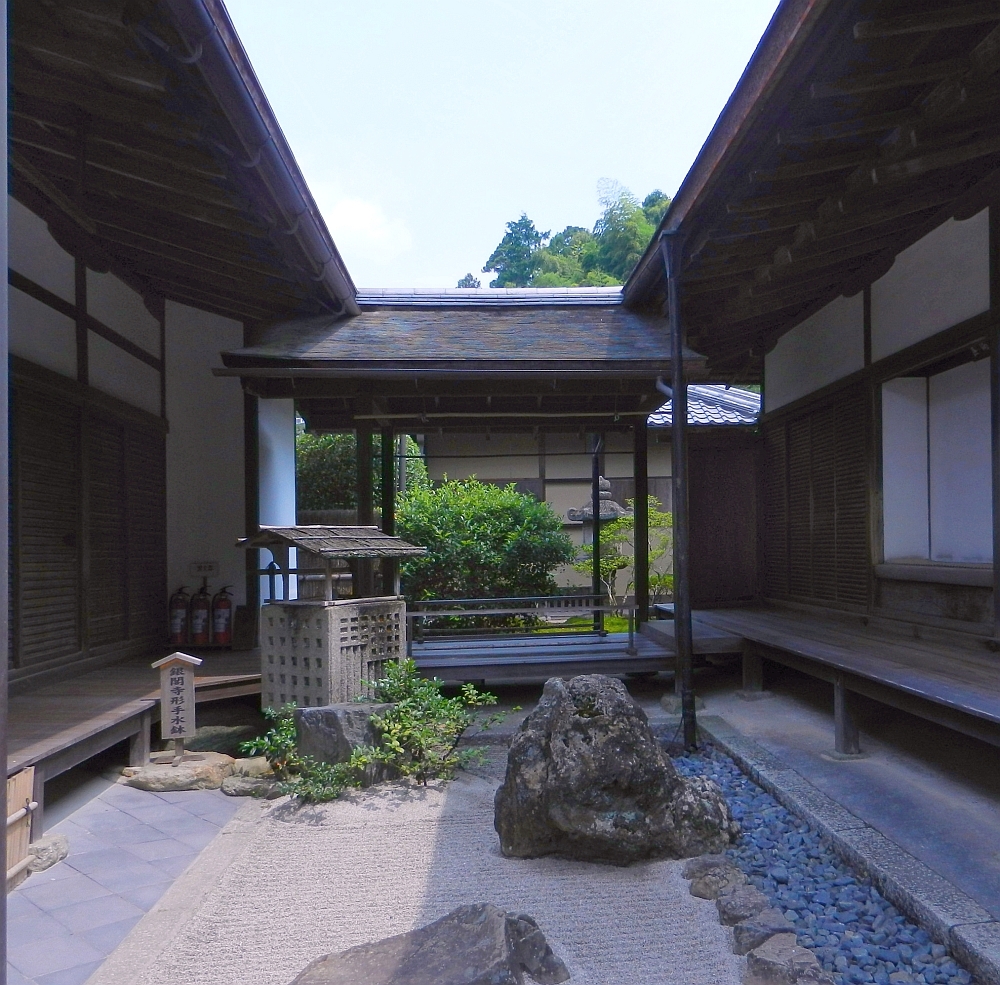 Garden of raked sand and rocks.

Yoshimasa became a Buddhist monk towards the end of his life. The courtyard’s design clearly shows the influence of Zen Buddhism. 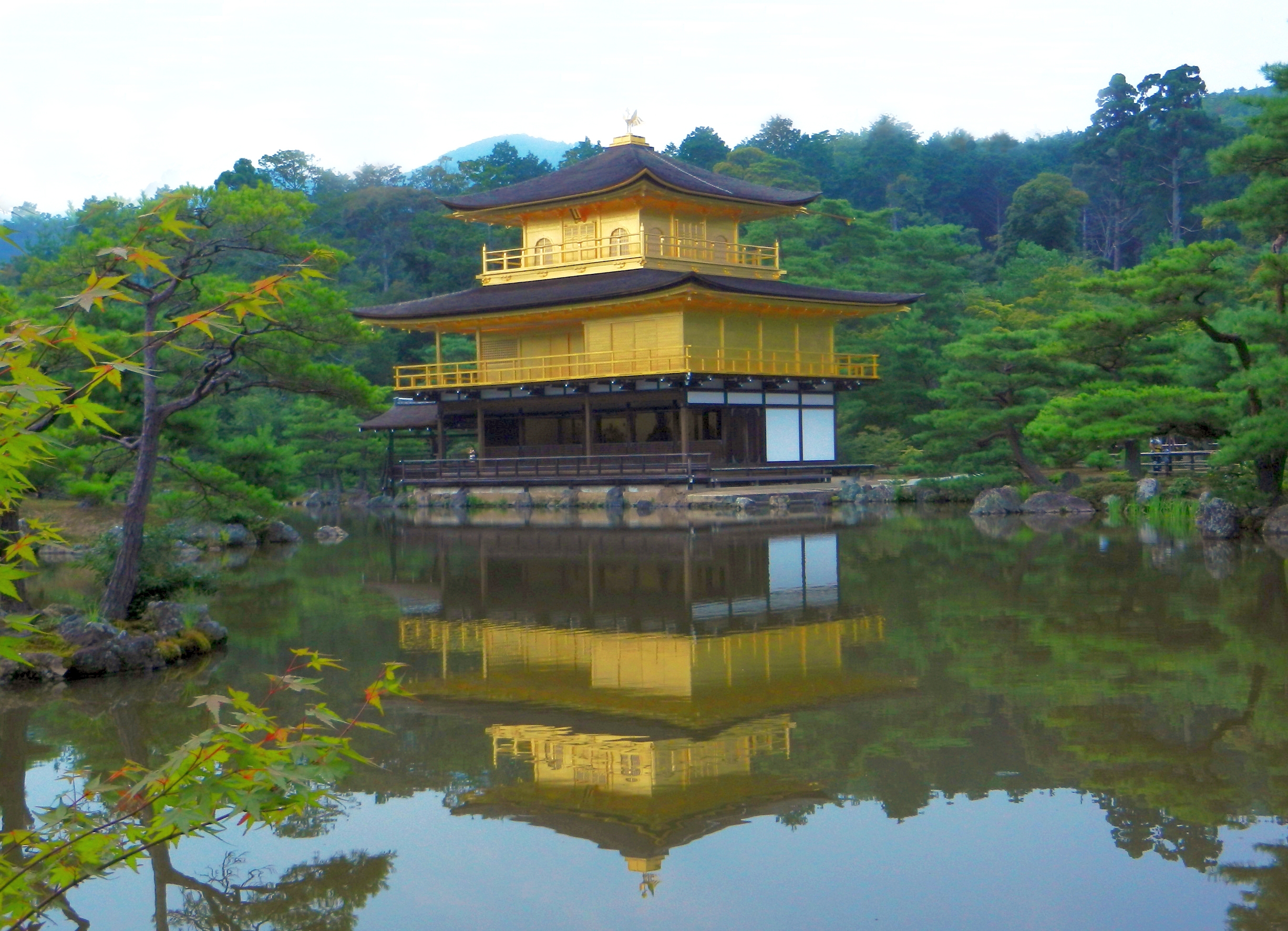 Kinkaku-ji (Temple of the Golden Pavilion).

Built by Shogun Ashikaga Yoshimitsu, Yoshimasa’s grandfather, Kinkaku-ji was the inspiration for Ginkaku-ji. This dazzling three story pavilion is covered in gold leaf and topped by a bronze phoenix. 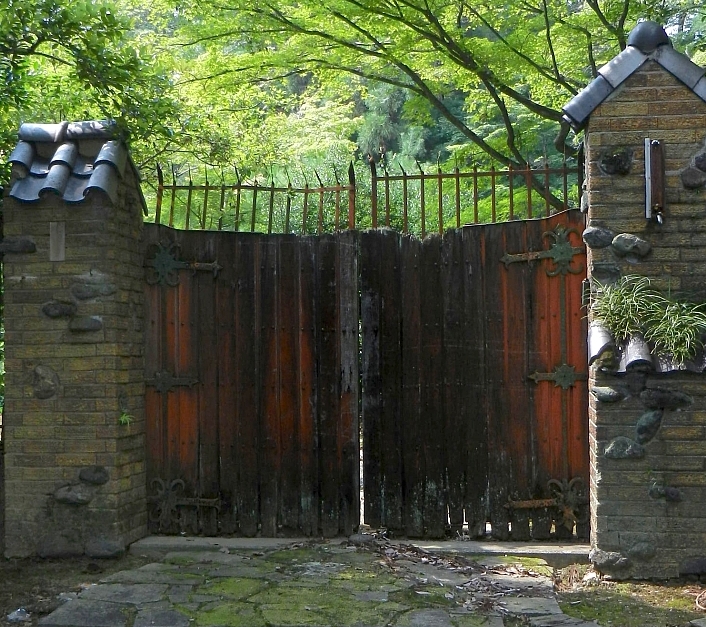 This wooden gate, despite the elaborate metal hinges, is a stark contrast to the lavish Kinkaku-ji. The surrounding trees appear almost luminous against the weathered wood. 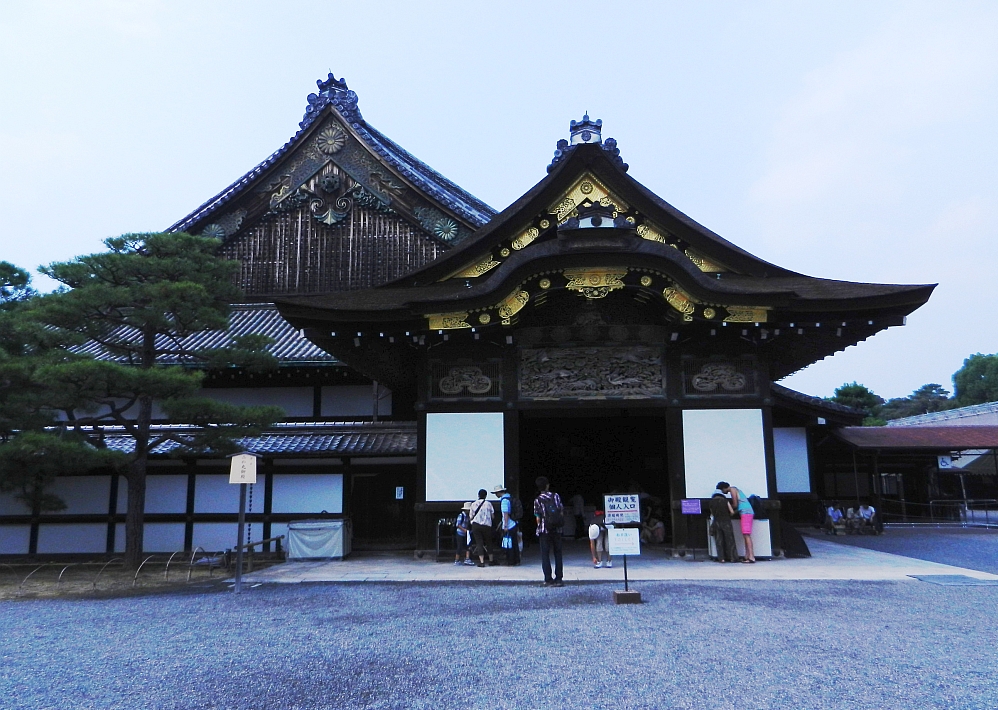 Nijo-jo is a UNESCO world heritage site. This palace was built in 1626 by shogun Tokugawa Iemitsu in honor of the Emperor’s visit to Kyoto. 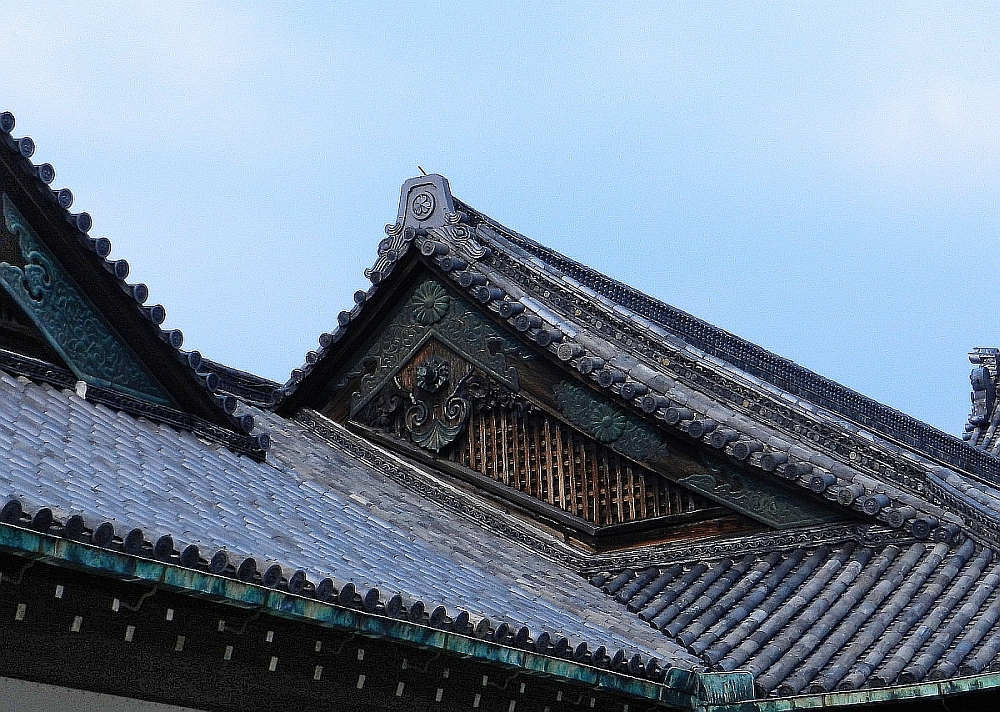 The castle eventually became an Imperial property after the abolition of feudalism. Surprisingly both the Imperial chrysanthemum and Tokugawa hollyhock crests can be found on this roof. 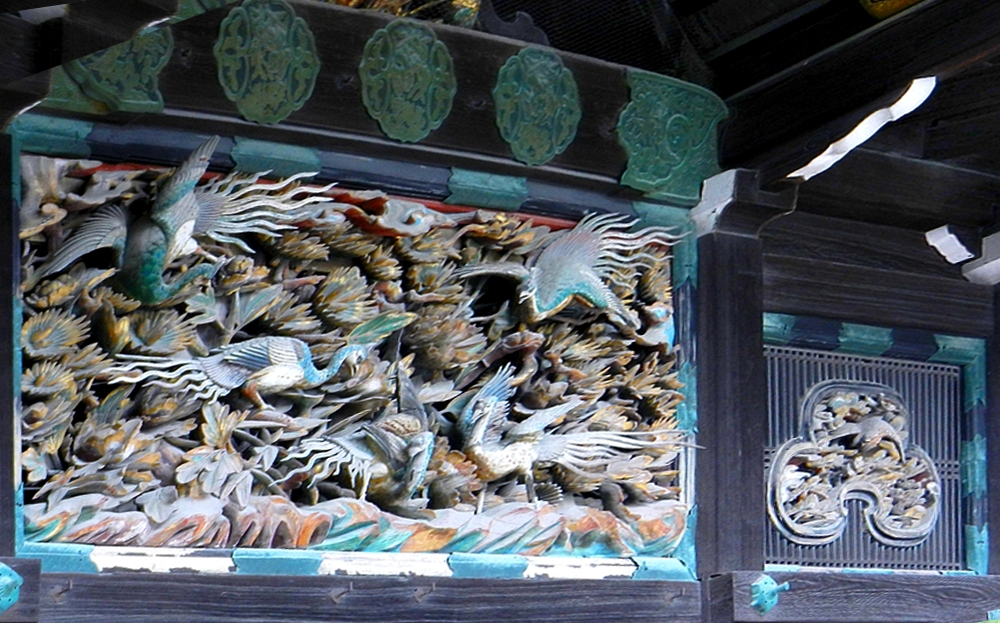 The Palace was lavishly decorated with intricate woodwork and gold leaf to show off the wealth of the shoguns. Amazingly, some carved transom panels display a different scene on each side! 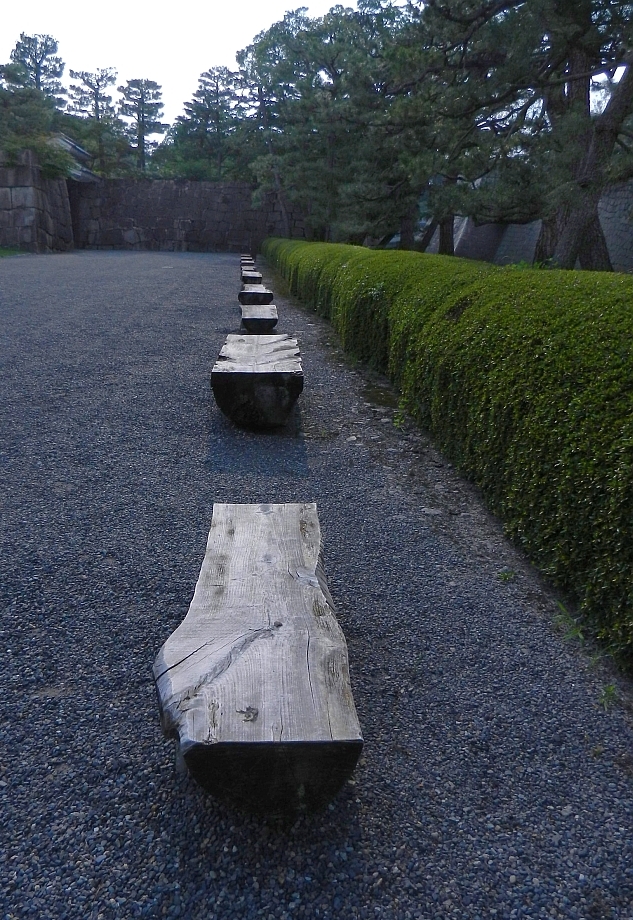 Weathered benches in the castle grounds.

We got in just before closing and found the entrance courtyard delightfully deserted. I love the natural beauty of the silvery time-worn benches. 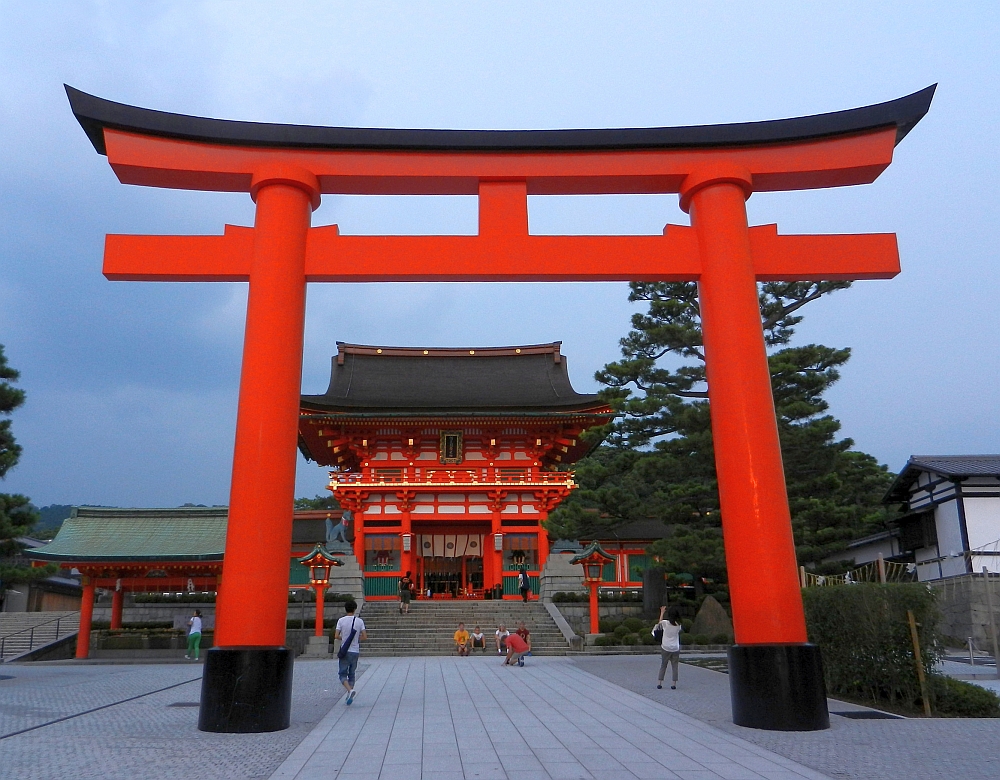 Torii gate at the entrance to the Fushimi-Inari shrine.

Since Fushimi-Inari is open 24/7, it was our last sightseeing stop for the day. Dedicated to the goddess of rice so by extension, business prosperity and success, it is one of Japan’s most popular Shinto shrines. 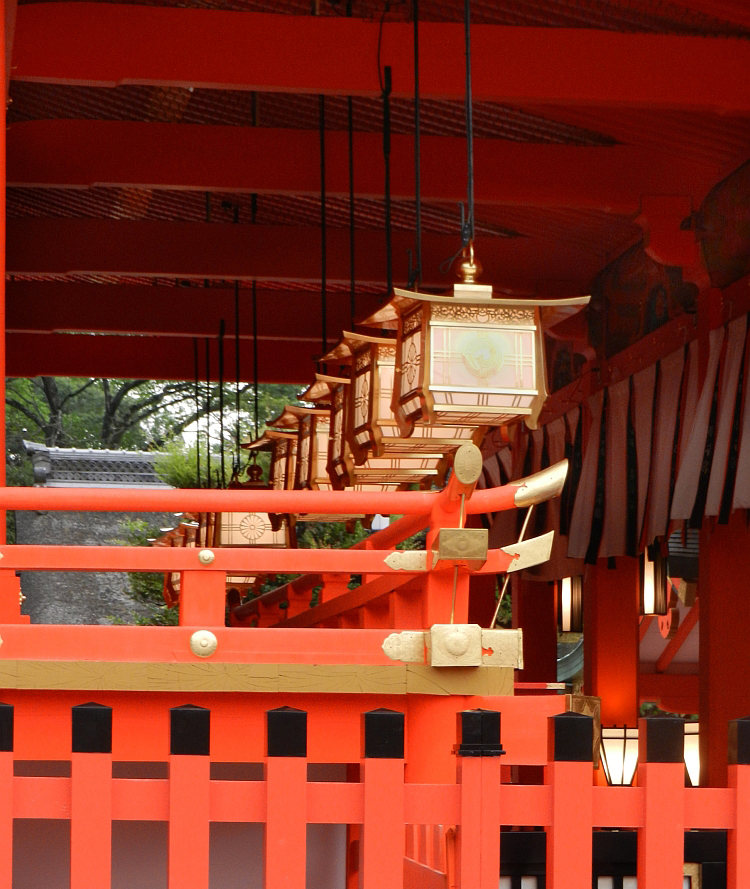 Lanterns outside the Honden (main hall) shimmering from the glowing sunset.

Aside from the main temple, there are several buildings where you can get your fortunes told, buy good luck charms, catch sacred music and dance performances by the Miko (shrine maidens), or simply pray… 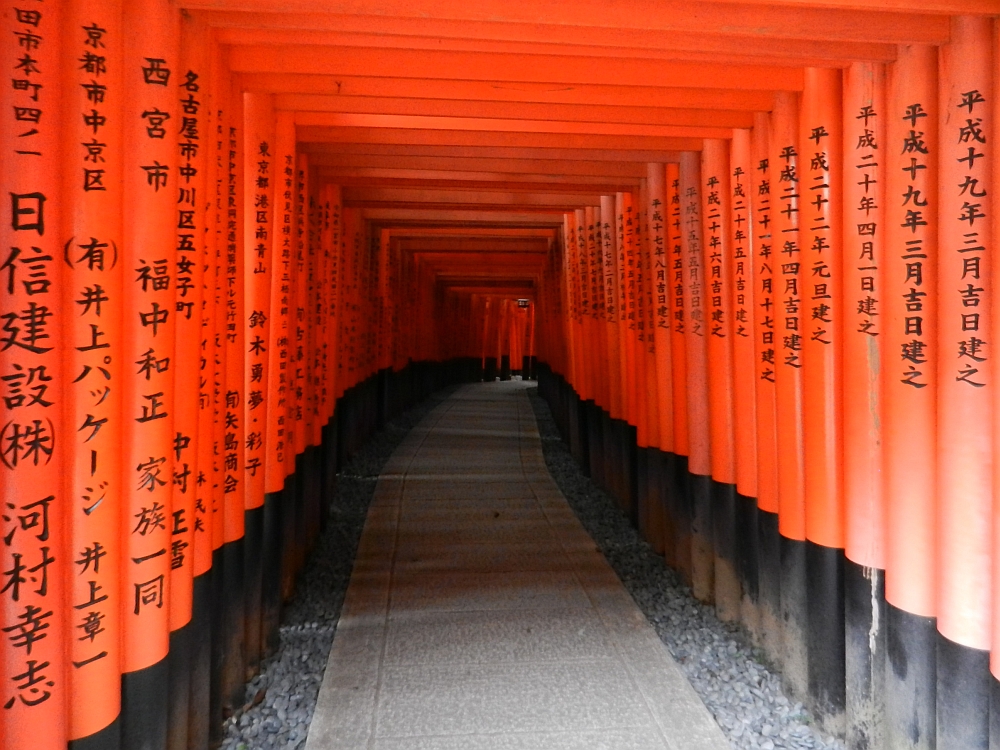 A tunnel of vermillion torii gates.

Behind the main grounds along the trail are thousands of torii gates. The torii are sponsored by companies or business people, with the business name written on the left and date of sponsorship on the right. 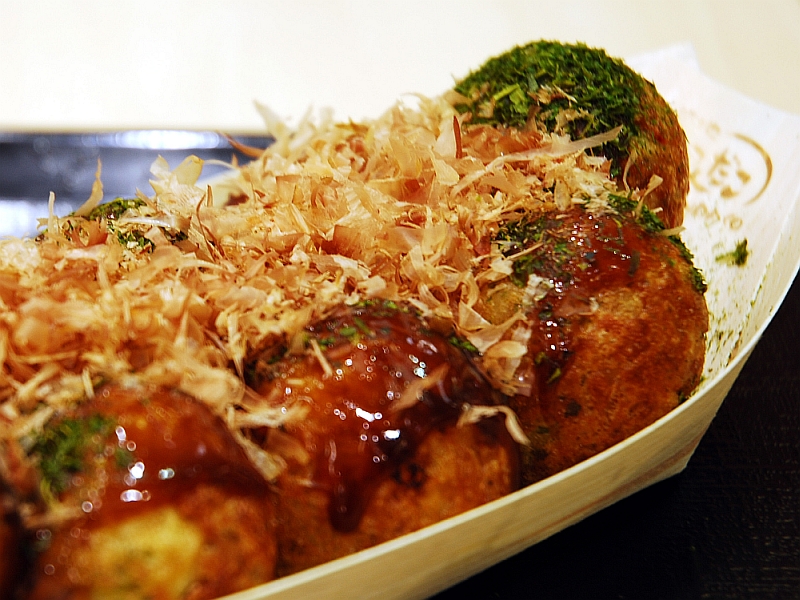 We had our first tako yaki at a food court. The ubiquitous street food from Osaka can be found throughout Japan.

The popular ball shaped snack has many variations, but tako yaki is basically made from a batter of diced octopus, grilled, then topped with a special sauce and dried seaweed or bonito shavings. 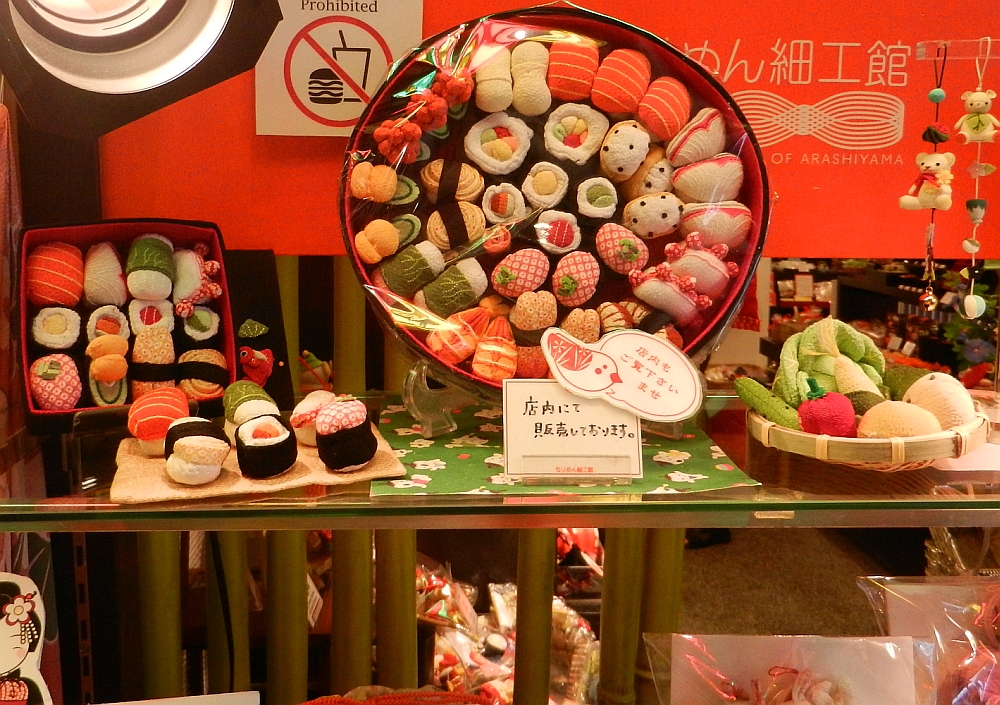 A shop window filled with trays of ‘incredible inedibles’!