For my latest blog post, I’ve put together a diverse collection of light fixtures where the designers look to nature (earth, land and sea) as their muse, draw upon cultural influences for inspiration and strive to create uplifting environments with this ethereal medium. Come, see beyond lighting as a functional need and appreciate it as an art form that will enrich your daily life! 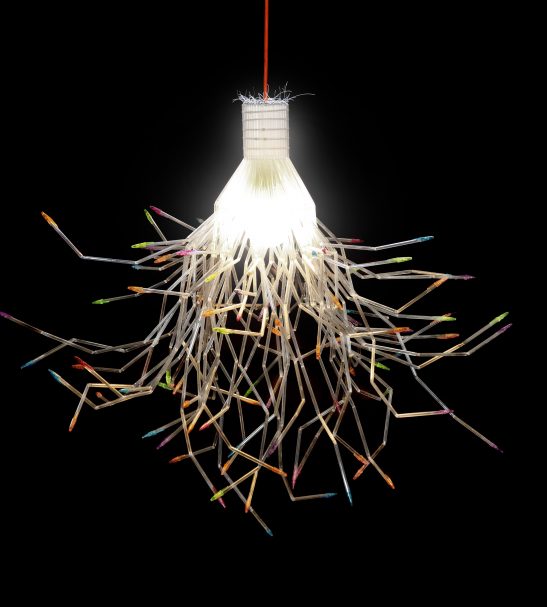 A chandelier on a Bad Hair Day?

Very green but painstaking: the Anemone is handmade by designer Paolo Ulian using 400 Bic Cristal pens! It doesn’t look that big, but when fully open, the ceiling fixture can reach 27.5” x 27.5” x 27.5”. Each arm is adjustable so you can change the shape and form of the light fixture any time you want a distraction from your mountain of ToDos… 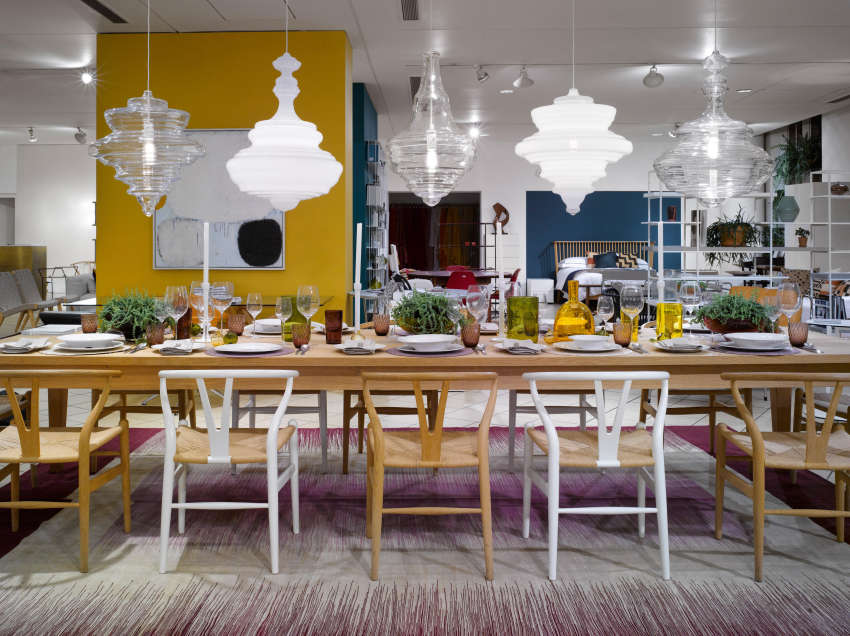 Jan Plechac & Henry Wielgus had a daunting task. Commissioned by Lasvit, a venerable Czech lighting manufacturer, their mission was to peruse iconic chandeliers from 5 grand opera houses & theaters (La Scala in Milan, Palais Garnier in Paris, the Metropolitan Opera in NYC, the Bolshoi Theater in Moscow, and the Estate Theater in Prague) and distill their essence into contemporary vernacular. The resulting collection that is based on stylized outlines of the opulent fixtures is spot on. The series of fixtures are handblown Bohemian crystal with maximum heights ranging from 16 1/8” (the Met) to 30 11/16″ (the Bolshoi Theater). Finish options include clear, iridescent, opal and smoked glass.

A sweet light treat for Francophiles!!

Just like its namesake French pastry, the Macaron lamp is deceptively simple in concept but difficult to perfect in reality. Spanish designer Silvia Ceñal Idarreta’s recipe was pretty minimalist: 2 pieces of wood and some cording. As a fan of macarons I have to say the result, based on her mastery of proportions, color and texture, came out fully baked! 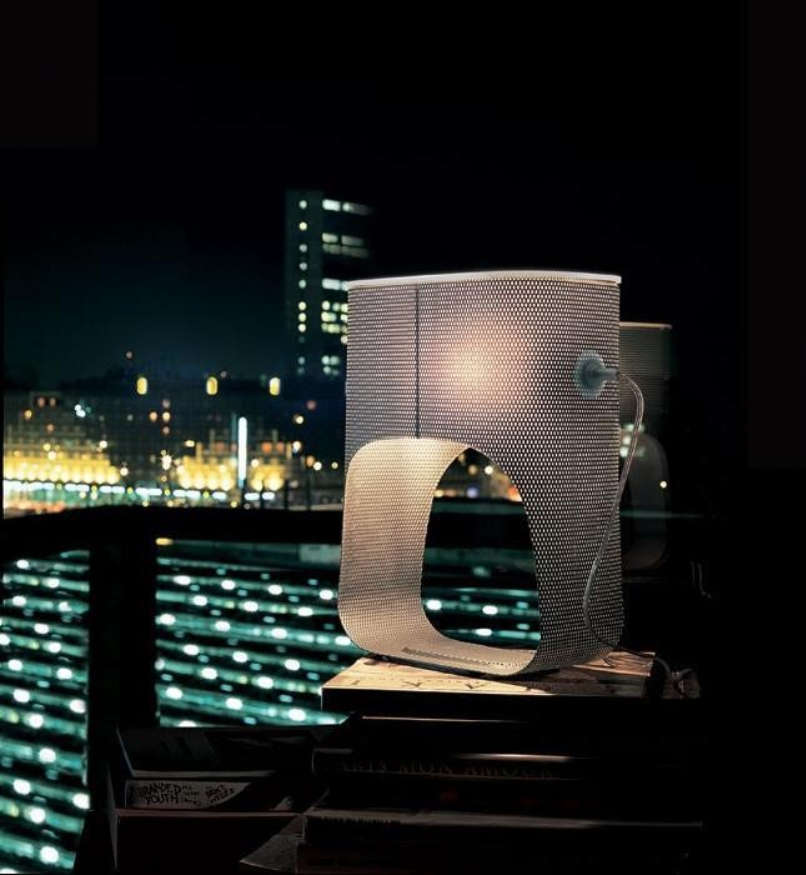 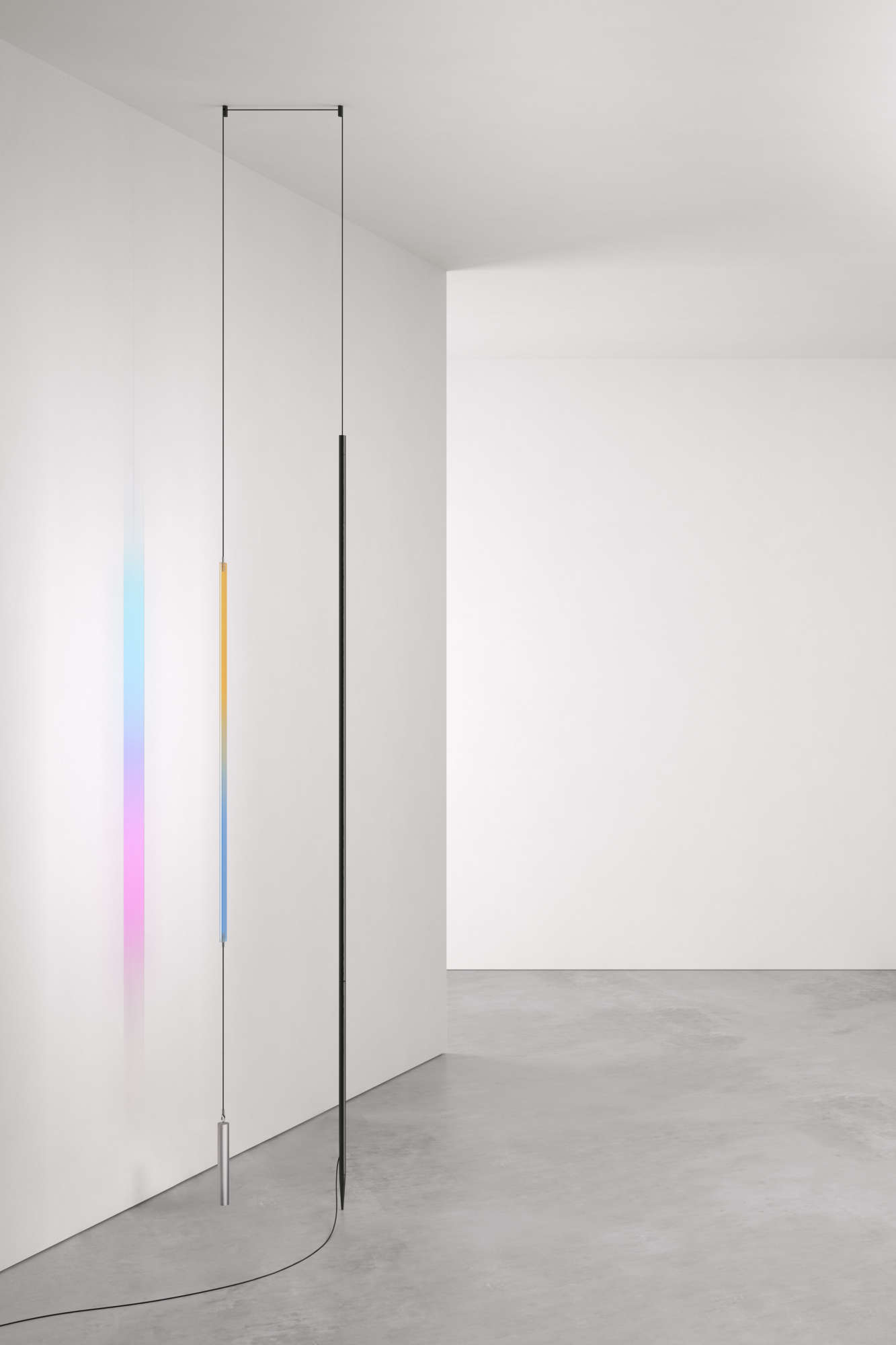 This LED fixture by Italian firm Formafantasma is not about the quantity, but the quality of light. The floor lamp features a dichroic filter that projects colorful gradients onto neighboring walls to provide an uplifting environment. Blush is available in 3 different finishes (aluminum, black and white) and different color reflections.

A flight of fancy for these suspension lamps.

The brainchild of Czech designer Boris Klimek, Night Birds is a graceful instance of biophilic design. While sighting a flock of birds in flight is a serendipitous occasion, having this artful arrangement as constant reminder of nature is a good second choice. Glass shades are available in 3 styles to depict wings in different stages of flight so a realistic silhouette can easily be done with a group of fixtures. Available through Brokis, the LED lighting comes in a choice of opal opaque or smoke gray glass and 4 cable colors. 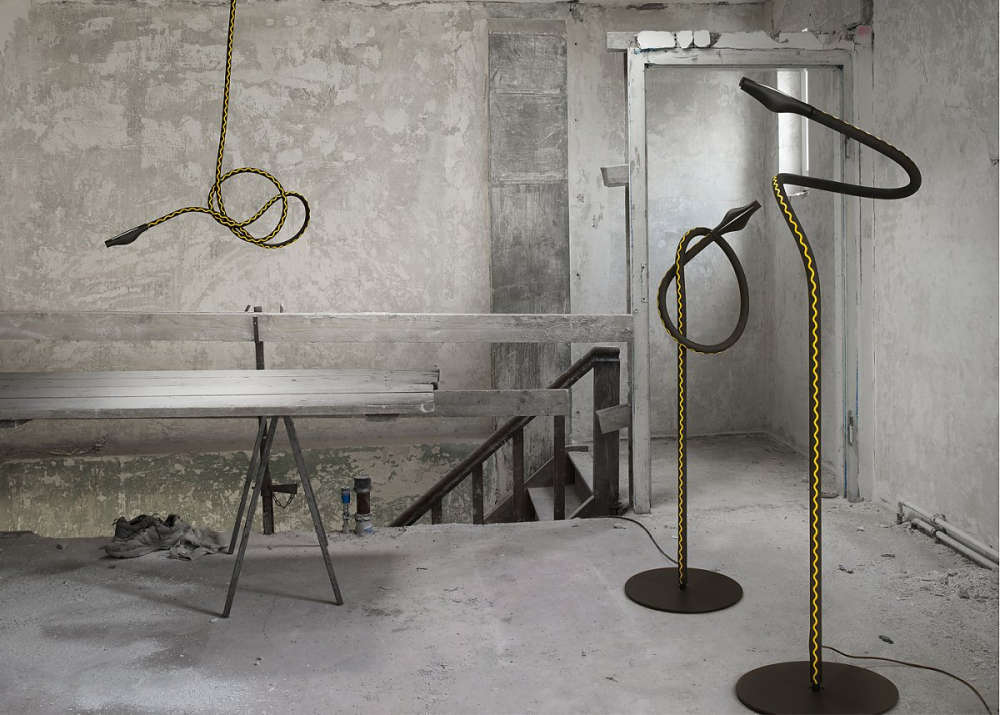 An invasion of plains garter snakes??

It’s always fun to share a creation from Ingo Maurer, whose whimsical, exo-modern lighting fixtures will liven up any space. This collection, called Alizz Cooper, recalls the edgy stage ambience of a certain pioneer of Shock Rock. The fixture itself is based on the Goldschlange® rubber garden hose. Since Goldschlange means gold snake in German, it’s only natural for the design to take on the physical attributes of a viper. Alizz F. Cooper, the floor lamp, is adjustable from 51.2″ to 74.8″ and houses a flexible gooseneck inside the hose to allow for contortionist poses. The dimmable fixture’s slim reflector ‘head’ can be rotated 360° for direct or indirect lighting. 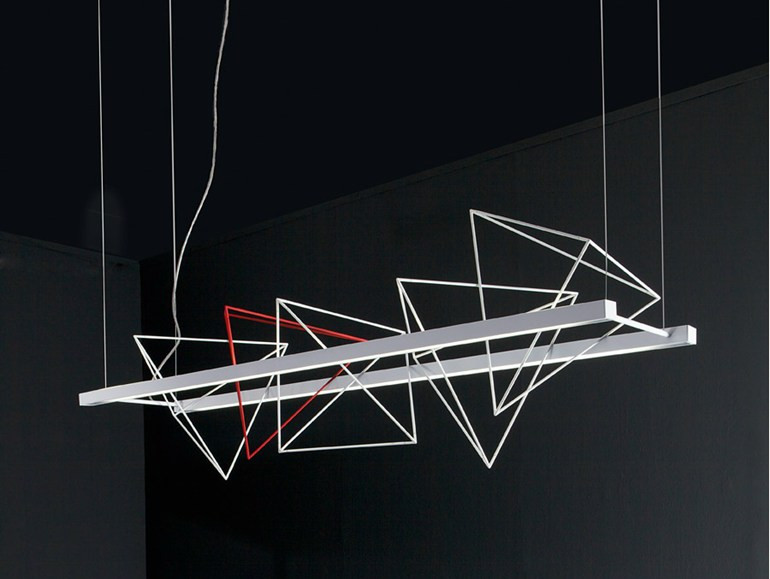 Linear pendant with a touch of Zen.

Kazuhiro Yamanaka delved into his heritage in the design of the Rock Garden pendants. Just as rock formations you can see in a traditional Japanese rock garden tell only part of the story – what is hidden below the surface and the rocks’ placement are of equal interest – you are encouraged to arrange the pyramids in the rectangular frame for your own inspirational ‘rock garden’.

Composed of matte lacquered metal and methacrylate, with transparent electrical cable, the frame is amply lit by two T5 54W linear fluorescent lamps. Pyramids come in white, red and black, but custom colors are available. The 49” version has 4 pyramids while the 59” fixture offers 5, with 1 contrast colored pyramid included in either set. 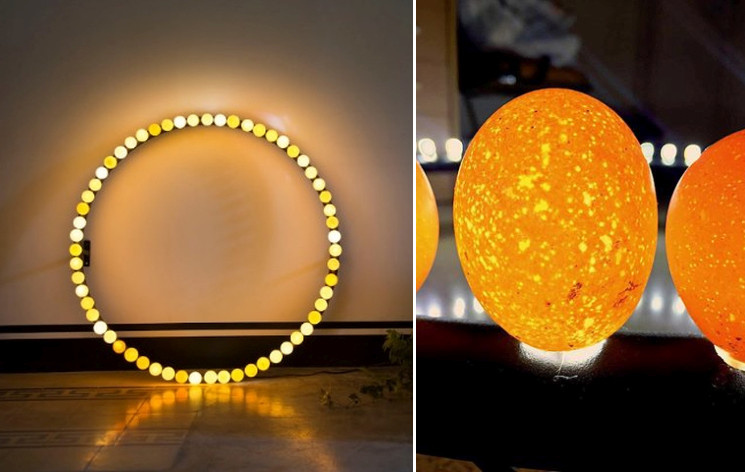 Intrigued by the notion that most ancient civilizations believe the universe was born from an egg, Beirut artist Youmna Geday created a light sculpture of 59 empty, reinforced eggshells. Called Unborn Creatures of Light, each of the eggshells are filled with LEDs, allowing each egg to glow with a different shade. Even more interestingly, on close inspection, you can see the LEDs highlighting individual egg’s speckles to create unique patterns on the shells and projecting them onto the surrounding surfaces!