On leaving Venice our ship sailed for the Dalmatian Coast of Croatia. We first visited the extensive Roman archeological site at Salona, then the historic town of Trogir. 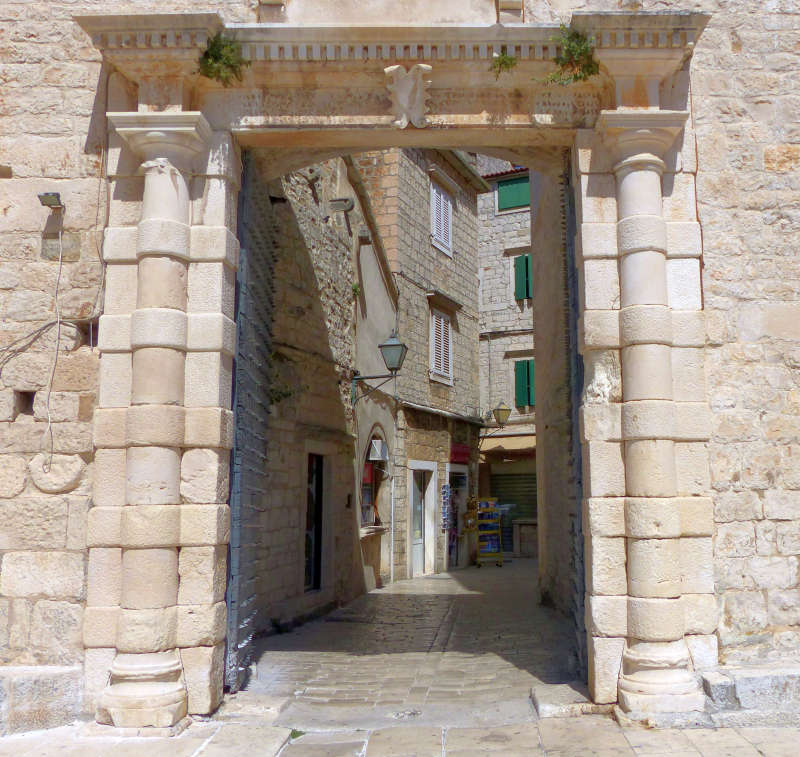 Porta Marina of Trogir, a World Heritage Site noted for its Venetian architecture.

We peered through the south gate into a narrow street of time worn stone. Trogir holds the bragging rights to having the best preserved Romanesque-Gothic complex in Central Europe. 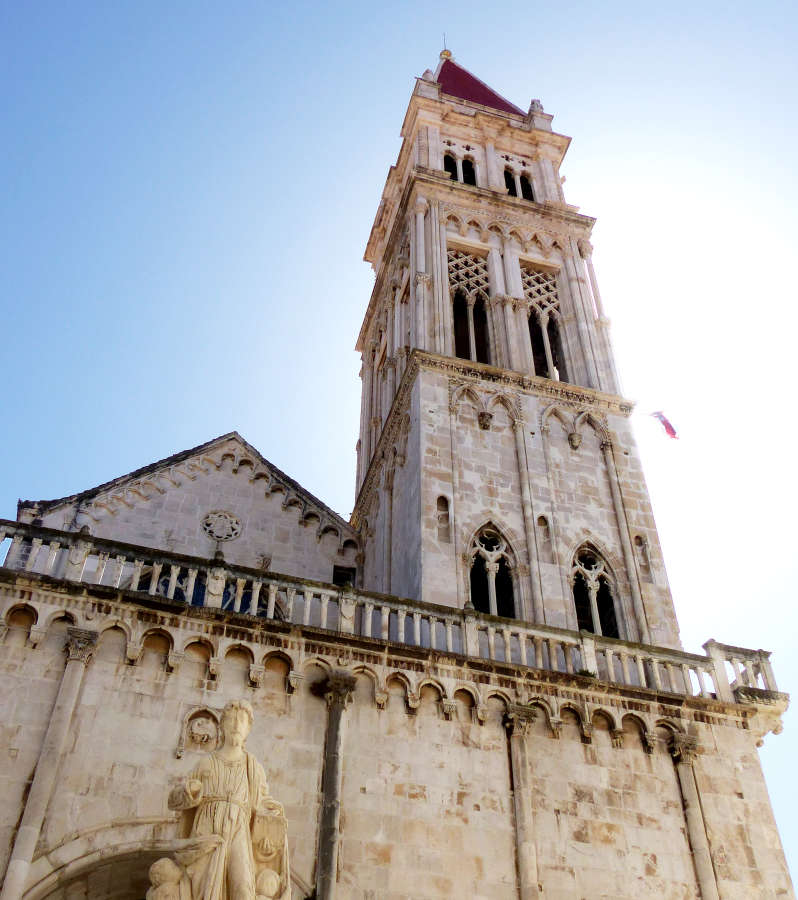 This tower was started in the 14th century but took a couple hundred years to complete. As a result, the 3 floors of the structure look different as it was built and rebuilt over time: while the first 2 floors’ tracery windows and ogival arches were Gothic in inspiration, with the 2nd floor distinctly reminiscent of the Venetian Palazzo Ca d’Oro, the top floor was Renaissance in style. 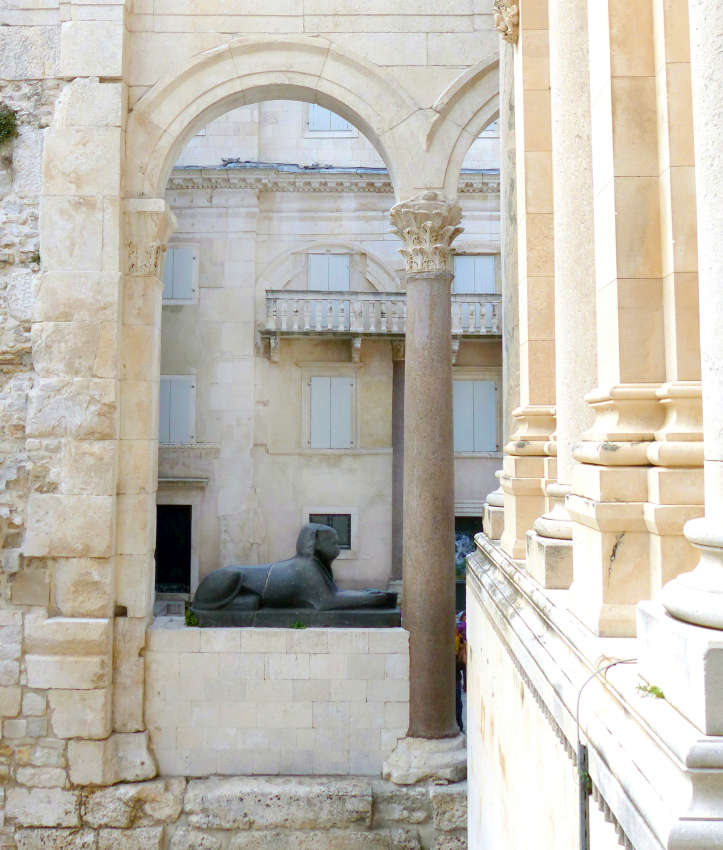 Twelve Egyptian sphinxes dating to Pharaoh Thutmose III were brought back by the Emperor but only three remain. This one is in the Peristyle (courtyard) of Diocletian’s Palace. 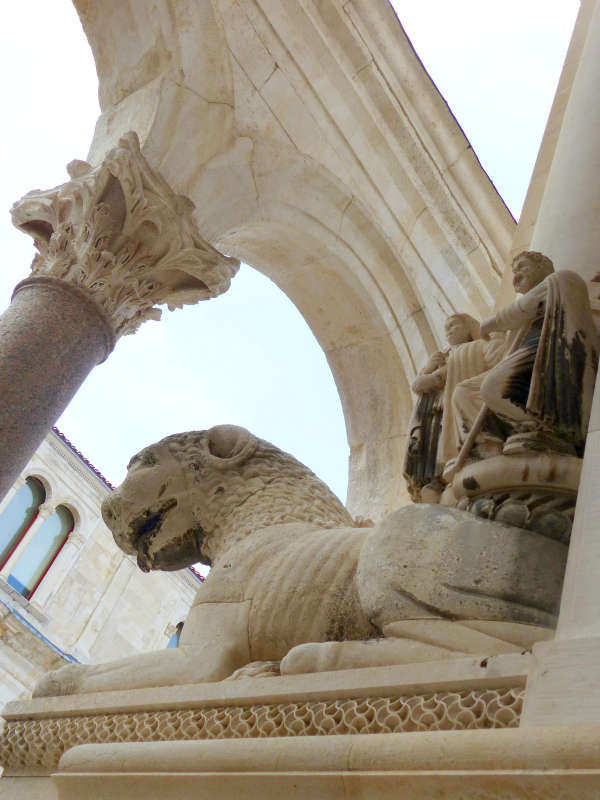 This building was originally built as the mausoleum for Emperor Diocletian. It was appropriated by the first bishop of Split and consecrated as a cathedral for Sveti Dujam (St. Domnius) in the 7th century. 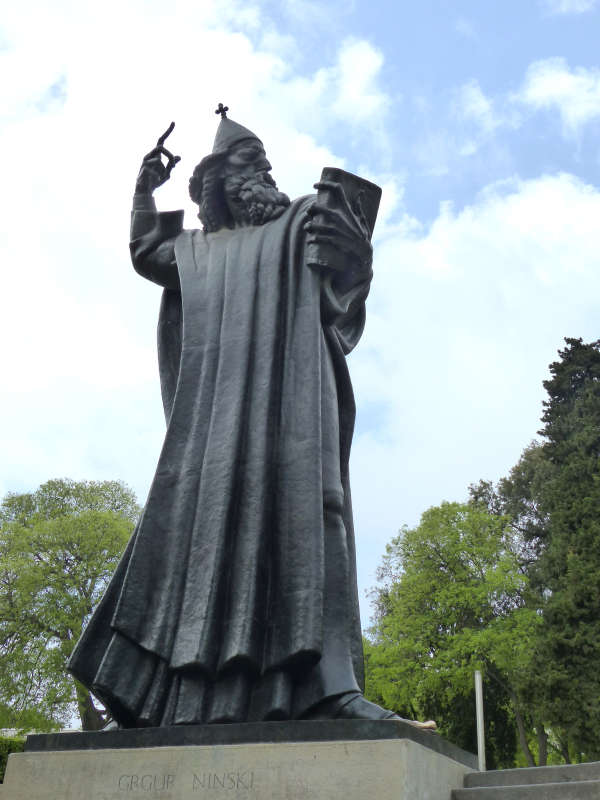 Is it Hogwarts Headmaster Dumbledore from Harry Potter or Gandalf from The Lord of the Rings?

Next to the North Gate of the Palace is a towering statue of Croatian bishop Grgur Ninski (Gregory of Nin) who replaced Latin in religious services with Croatian. Purportedly, if you make a wish while rubbing his big toe, the wish will come true and hence his VERY shiny toe! 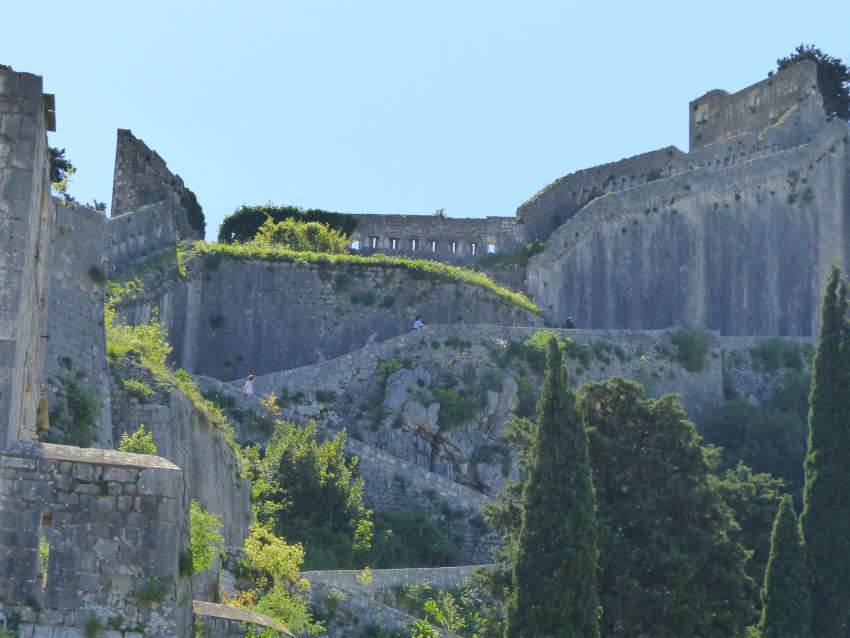 The dragon’s spine that is the fortification of Kotor.

The military defense system around the Old Town of Kotor in Montenegro is designated as a UNESCO World Heritage Site. Reachable by approximately 1,350 steps and 853 ft above sea level is Tvrđave Kotora, the Castle of San Giovanni or St John, depending on whether you’re using its Venetian or English name. 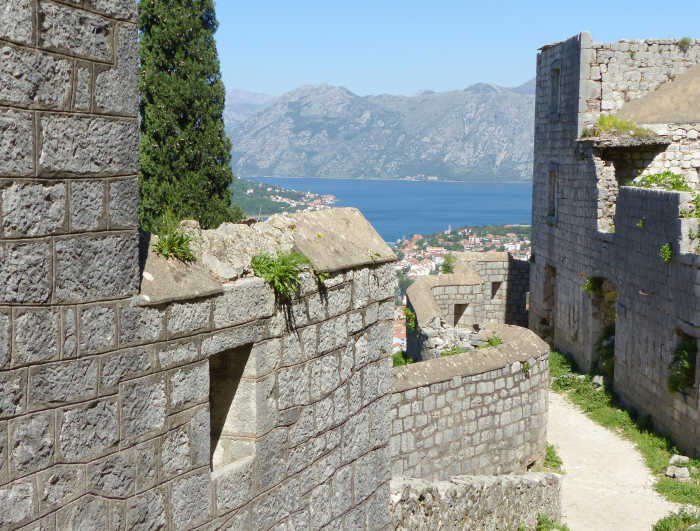 The path up to the castle offers great views through embrasures (openings) in the parapet walls. 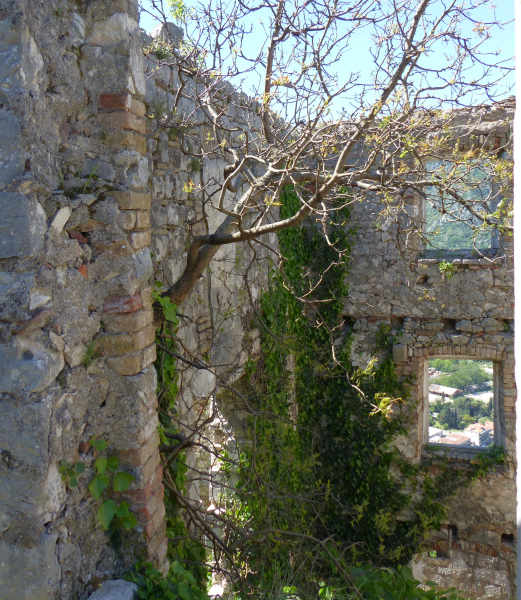 Desolate remains of the fortifications frame the view.

It was a lovely hike up and I got a nice bit of exercise. While I used my camera’s monopod as a hiking staff, there were a good few Europeans getting around in earnest with the real deal. 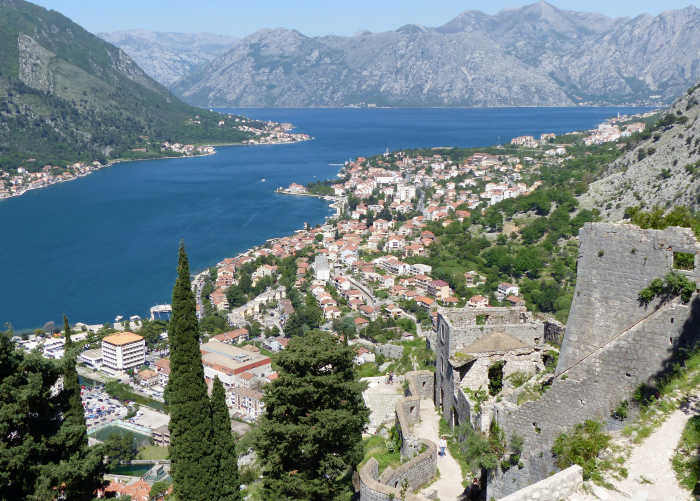 Stunning birds eye view of Kotor from the top.

Spectacular vistas on this scorching day: Kotor edged by the deepest fjord in the Mediterranean and ringed by the 5738 ft Dinara Alps. 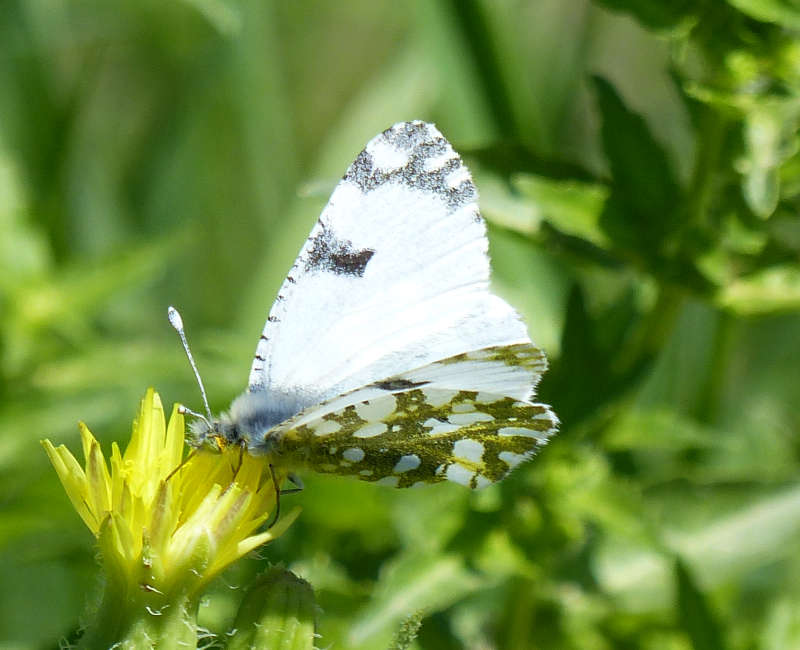 Butterfly along the path on the way down.

As we wind our way down the hillside, I saw this butterfly sporting psychedelic white spots on the underside of its gold-dust wings. 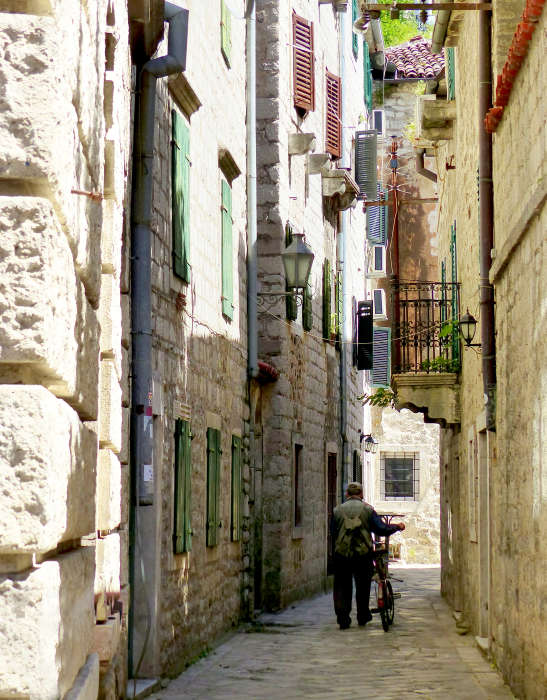 Kotor is a popular cruise destination and visitors can overwhelm the town in summer. Luckily I went in April and most of the cruise passengers were at the Castle. The Old Town’s sun-dappled alleys with colorful painted shutters were blissfully empty except for an occasional local passing by. 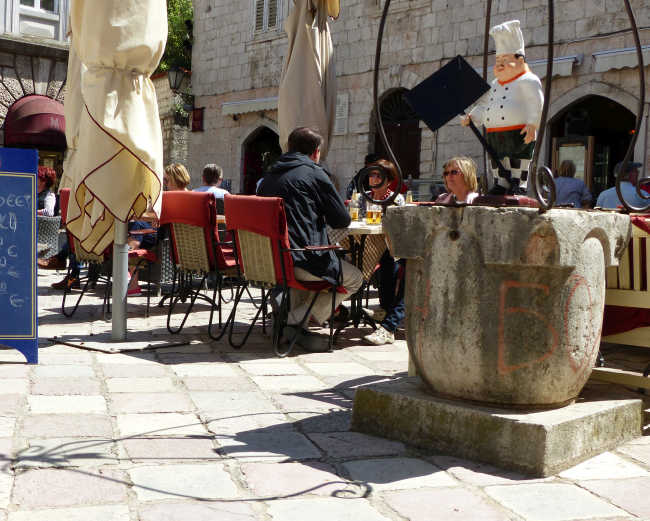 A ‘chef’ stands proudly on top of the well.

We finally walked by one of the Old Town’s squares and found a gaggle of tourists chilling out over a leisurely lunch. 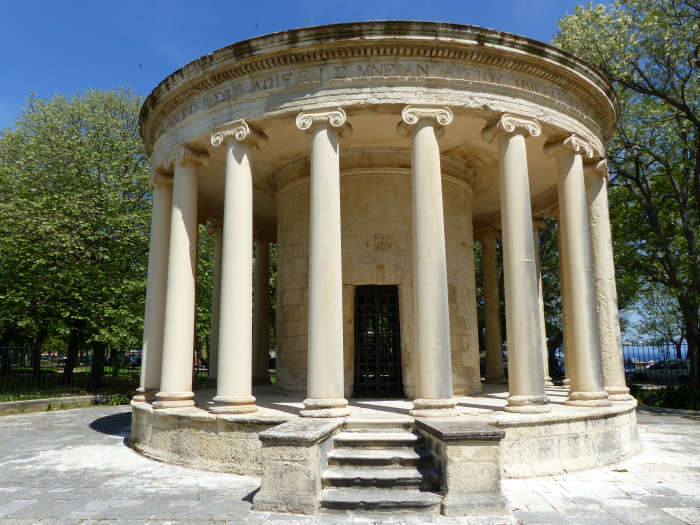 The next day brought us to the sun-drenched island of Corfu (Kerkyra). Also known as Peristyle of Maitland, this neoclassical monument is at one end of Spianada Square, the largest square in Greece. It was built in 1821 to honor Sir Thomas Maitland, Britain’s first Lord High Commissioner of the Ionian Islands. 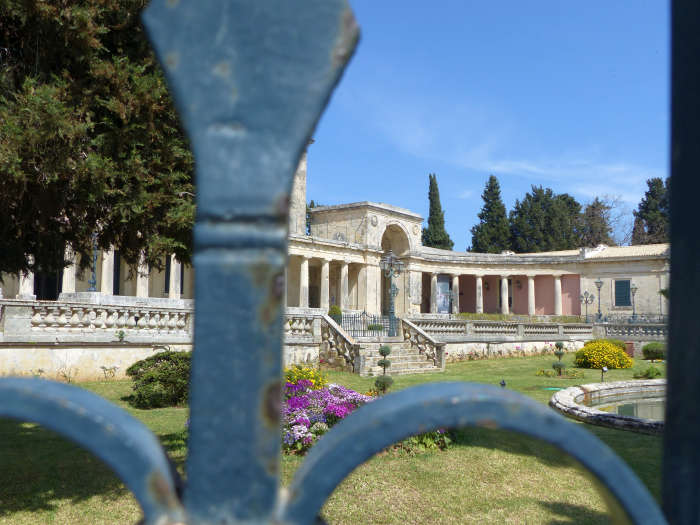 The Palace of St. Michael and St. George. 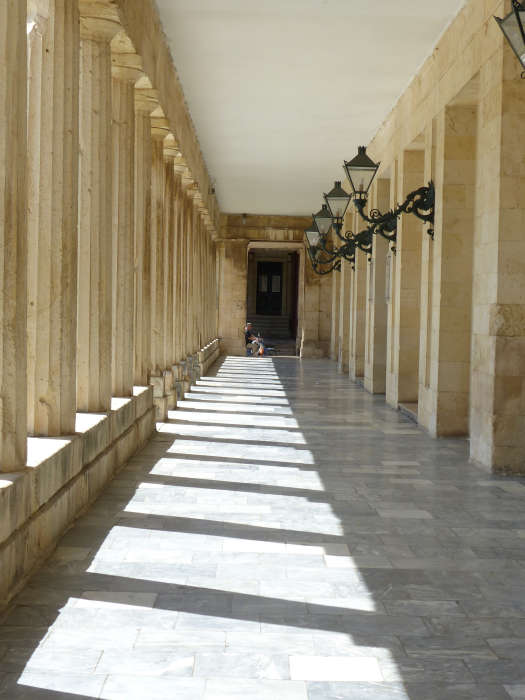 Rhythmic cadence of light and shadow dances across the loggia.

Locally known as Palaia Anaktora, literally meaning Old Palace, the building was commissioned by Sir Thomas Maitland to be the High Commissioner’s residence, home of the Ionian Senate and the Order of St Michael and St George. The Palace currently serves as the Museum of Asian art. When we visited, the grounds were virtually deserted. 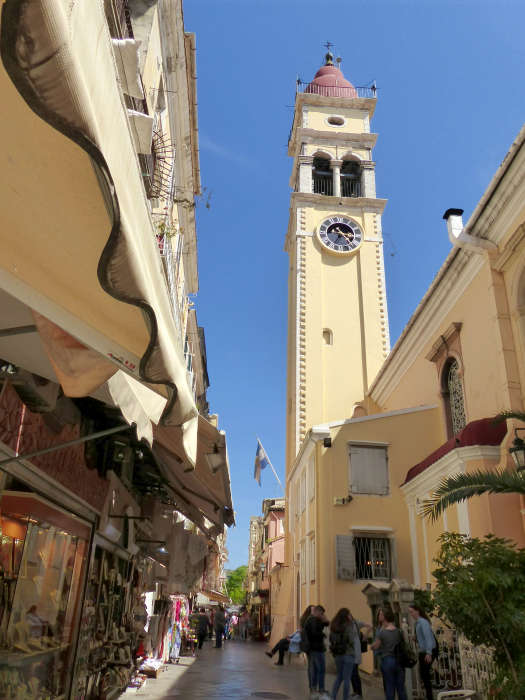 Named after Corfu’s patron saint, St. Spyridon, this Greek Orthodox Church in the Bazaar of Old Town dates back to the 16th century. As the highest point in Kerkyra, the red domed bell tower is visible all over town. 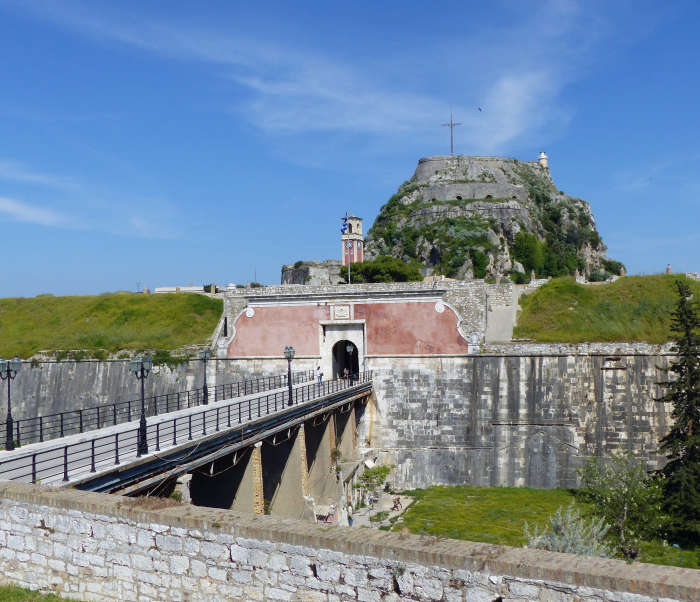 The Venetians ruled Corfu for 4 centuries and recognized the strategic importance of the island. They built the Old Fortress on a rocky outcrop, created a moat using the sea channel, and turned the promontory into an island. A permanent drawbridge now connects the fortress with the town.